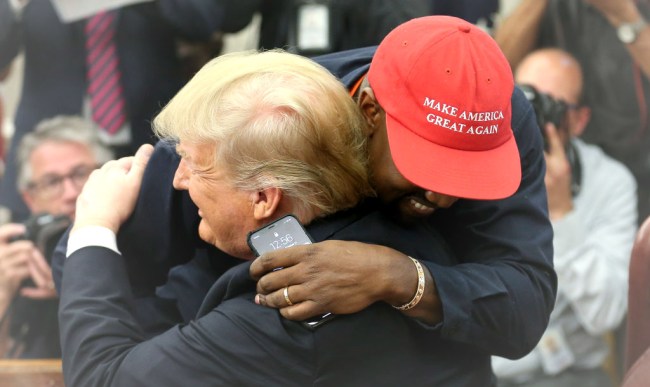 Kanye West, Kid Rock, the Beach Boys’ Mike Love, and more musicians met with President Donald Trump today. (No, this is not a lede swiped from The Onion.)

Aside, before we get into this… is Kanye still going by his new name “Ye” or are we already over that?

Okay, back to the story.

Ye was in town, ostensibly, to discuss job opportunities for ex-convicts, prison reform, how to prevent gang violence and reduce violence in Chicago (Ye’s hometown), and ways to increase manufacturing jobs in the Chicago area.

West’s wife, reality TV star Kim Kardashian has already met with Trump twice at the White House. (Again, this is not from The Onion.)

During Ye’s visit with The Donald, he said about the red MAGA cap he was wearing, “There was something about putting this hat on that made me feel like Superman.”

However, it wasn’t Ye’s hat that garnered all the attention from the internet today. It was that iPhone you see him holding in the photo above.

That’s because when West unlocked his iPhone to show Trump a GIF of a hydrogen-powered plane he showed the whole world his passcode: 000000.

No one man should have all those zeroes. https://t.co/DomrRsuwFb

Well, at least he has historical precedence for his phone code: https://t.co/CkCtQY5G1m

I just found out Kanye West’s iPhone password is ‘0000.’ Productive day all in all. pic.twitter.com/MkVnCJpUXB

That gif of Kanye entering his iPhone passcode is hypnotic.

We have been trying to crack into Kanye's iPhone for months. This was our reaction at HQ when we finally found out his code is 000000. pic.twitter.com/d6DOIms0Lo

Kanye West enters his iPhone password "000000" in live TV and then hugs US President Donald Trump is a sentence which 5 years ago would have been a parody but in 2018 is true. #HowDidWeGetHere