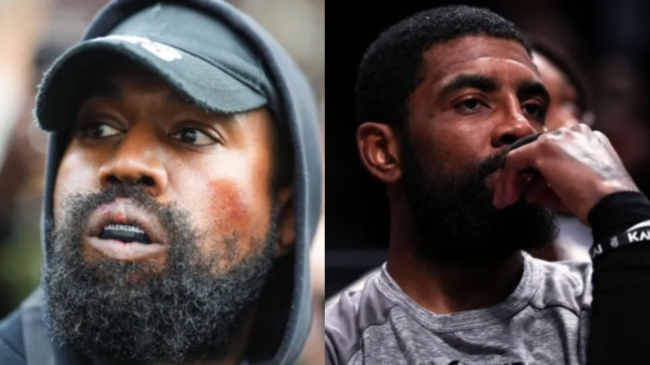 Taking to Twitter early Thursday morning (because he’s suspended from Instagram as a result of his antisemitic rhetoric), fashion designer and former rapper Kanye West showed his support for Brooklyn Nets point guard Kyrie Irving, who has also been dabbling in antisemitism in recent weeks.

West, 45 years old, posted a captionless picture of Kyrie Irving’s face, which is an obvious sign of solidarity with the former NBA champion. Irving has been creating headlines in recent weeks for his similar antisemitic views, and on Wednesday night, released a statement that included a vague apology and a commitment to donate $500K (of his $36 million salary) to charity.

West’s support of Irving comes just hours after a new report revealed that he paid a settlement to a former employee who alleged that he praised Adolf Hitler and the Nazi party. Furthermore, “six people who have worked with Ye or witnessed him in professional settings over the past five years told NBC News that they had heard him mention conspiracy theories about Jewish people or praise Adolph Hitler.”

The father-of-four has been dropped by the likes of CAA, Balenciaga, and Adidas in the last few weeks as a result of his antisemitic rhetoric, which is perhaps been something that Kanye has been doing for far longer than the public realized if recent reports are to be believed.

As for Irving, he found himself in hot water from promoting the film “Hebrews to Negroes,” which — among many other antisemitic tropes — proliferates a fake quote from Hitler about the “true Jewss” while also claiming the six million Jewish people that were killed during the Holocaust is “one of five major falsehoods” and is a result of “the Jewish controlled media.”

RELATED: Kanye West Reportedly Paid Out A Settlement To Former Employee Who Alleged He Praised Hitler And Nazis