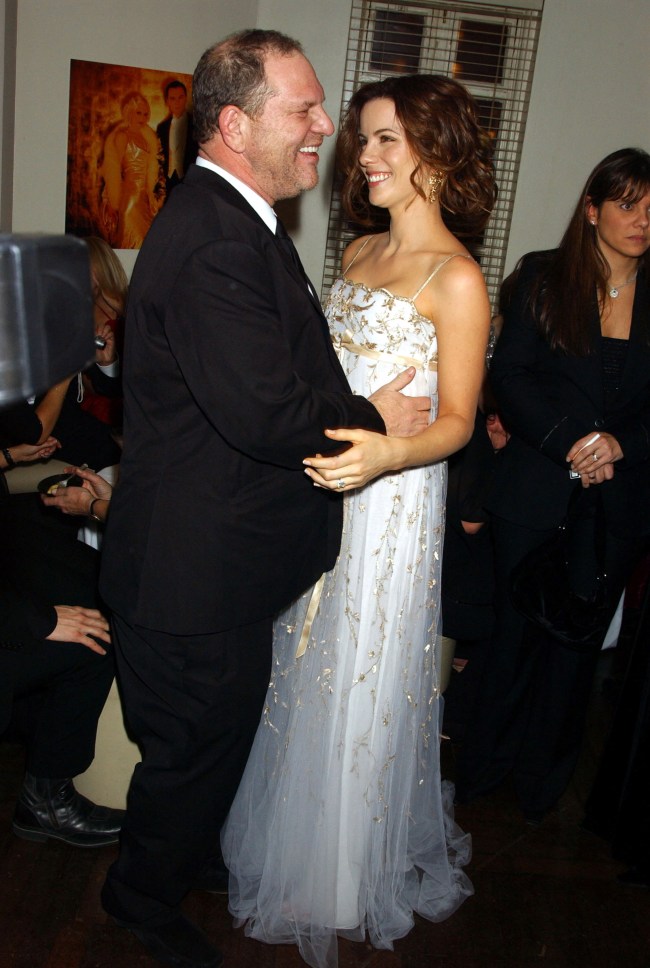 Following disgraced Hollywood producer Harvey Weinstein being sentenced to 23 years in prison after being convicted last month of rape and sexual assault, actress Kate Beckinsale shared a disturbing story about the producer’s behavior.

The 67-year-old Weinstein was sentenced to those 23 years on Wednesday after asking the court for the mandatory minimum of just five years because “his fall from grace has been historic.”

Following his being sent to prison for the rest of his life, one of the women who stated that she was going to wait to tell her Harvey Weinstein story of abuse so as not to take any attention away from the women he physically assaulted was Beckinsale.

On Thursday, she told it.

Related: Harvey Weinstein Said Jennifer Aniston ‘Should Be Killed’ Over Assault Claim, His Brother Told Him He Belongs In Hell

“These photos were taken at the premiere of Serendipity on October 5, 2001. We all refused to go because holding a premiere mere weeks after 9/11 with the city still smoking felt like the most insensitive, tone deaf, disrespectful idea possible. But Harvey insisted. We flew into New York and somehow got through it,” Beckinsale wrote on Instagram.

“The next morning Harvey called me and asked if I would like to bring my less than two year old daughter to his house for a playdate with his similar-aged daughter I said ok. I turned up and he immediately called for his nanny to take the babies to another room to play. I went to go with them and he said ‘No, you wait here.’

“The minute the door closed he started screaming ‘you stupid fucking CUNT, you CUNT you ruined my premiere.’ I had no idea what he was talking about and started to shake. He said, ‘If I am throwing a red carpet you get in a tight dress, you shake your ass you shake your tits you do not go down it looking like a fucking lesbian you stupid fucking cunt.’

“The shock made me burst into tears. I tried to say ‘Harvey,the city is on fire, people are still looking for their relatives none of us even felt the premiere was appropriate much less coming out dressed like it’s a bachelor party.’ He said, ‘I don’t care – it’s my fucking premiere and if I want pussy on the red carpet that’s what I get.’ Screaming. Livid. I managed to get myself and my child out of there and yes that was one of many experiences I had that there was no recourse for, and falls under no felony. But I WAS punished for it, and for other instances where I said no to him for years, insidiously and seeming irreversibly.

“Hearing that he has gone to prison for 23 years is a huge relief to me on behalf of all the women he sexually assaulted or raped, and I hope will be a deterrent to that sort of behavior in this and any other industry. Having said that, the crimes that are not crimes, the inhumane bullying and sick covert abuse for which there is STILL no recourse no matter who you tell (and I did tell), these too need to go. I hope and pray that we as an industry can start to actually outlaw all abuses of power and expose them and eliminate them, for all genders, forever. And Rose, brava ❤”

In 2017, Beckinsale made a similar statement about Weinstein when she told a story about his first meeting with him at the Savoy Hotel when she was 17-years-old and he answered the door in his bathrobe.

Related: Harvey Weinstein Accuser Testifies In Court That He Doesn’t Have Testicles, Appears To Have A Vagina

“I was incredibly naive and young, and it did not cross my mind that this older, unattractive man would expect me to have any sexual interest in him,” she told The Hollywood Reporter. “After declining alcohol and announcing that I had school in the morning, I left, uneasy but unscathed.”

“A few years later he asked me if he had tried anything with me in that first meeting. I realized he couldn’t remember if he had assaulted me or not,” she recalled. “I had what I thought were boundaries — I said no to him professionally many times over the years — some of which ended up with him screaming at me calling me a cunt and making threats, some of which made him laughingly tell people, ‘Oh, Kate lives to say no to me.’ It speaks to the status quo in this business that I was aware that standing up for myself and saying no to things, while it did allow me to feel uncompromised in myself, undoubtedly harmed my career and was never something I felt supported by anyone other than my family.”