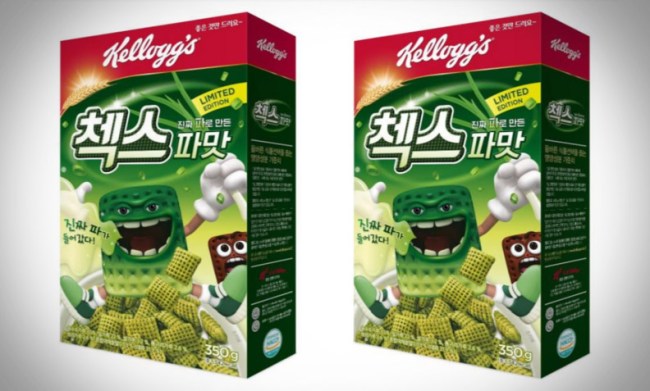 Serious question: do they drug test over at Kellogg’s? First, back in May, they completely revamped the look of Froot Loops mascot Toucan Sam, which proceeded to make most of the internet angry. Then in June, Kellogg’s went and combined Frosted Flakes and Fruit Loops into one box, upsetting cereal purists.

And now, in July, Kellogg’s will be releasing a cereal that tastes like… green onions?

Why, oh why, would Kellogg’s foist such an abomination upon the world now? Well, apparently this green onion-flavored Chex cereal has been 16 years in the making.

For you see, way back in 2004, Kellogg’s Korea held a contest where people could vote for the new “President of Chex.” They had two choices, Cheki, the milk chocolate candidate, and Chaka, the green onion cereal candidate.

As is always the case in contests like these, while Kellogg’s Korea was expecting a landslide win for the chocolate candidate, because who in their right minds would want to eat an onion-flavored cereal, after a month of voting, guess who won? You got it. Chaka, the green onion cereal candidate.

Related: Ranking The Top 5 Cereals Of All Time

So because Kellogg’s Korea had zero desire to actually produce a green onion-flavored cereal, they claimed that despite Chaka having won, there were some “abnormalities” with his votes and Cheki, the milk chocolate candidate, was awarded the victory.

Of course, voters were not happy with the election being overturned and for 16 years have been campaigning for their green onion-flavored Chex cereal to be made.

“We never expected consumers would be interested. But every time we had promotional events, online communities asked for it,” said a Kellogg’s Korea spokeswoman.

According to a review by the Korea Herald, “It’s tasty as a snack by itself, and if you eat it with milk, the milk becomes tastier,” the cereal maker claimed on the back of the cereal box. Eaten with milk, the cereal still didn’t have the bitterness or the spiciness of green onion and tasted like a sweet green cereal aimed at kids. The leftover milk after the cereal was also sweet, but nothing special.”

Yeeeeeah, I think I’ll just take their word for it.