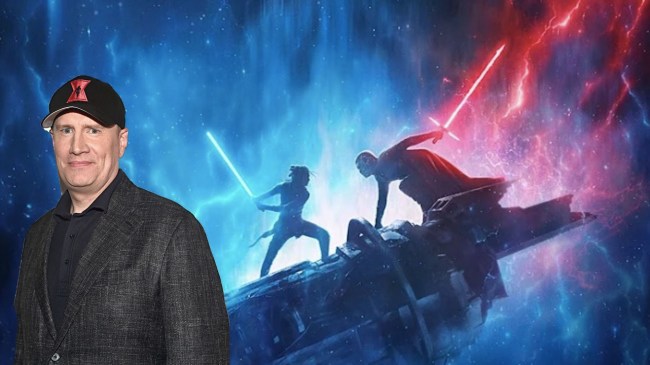 As time continues to pass, more and more things in this world are beginning to fall under the former category as Disney continues to gather valuable movie franchises like they’re the Infinity Stones.

But of all Disney’s various properties and franchises, there are two that clearly stand out above the rest: the Marvel Cinematic Universe and the Star Wars universe. And according to The Hollywood Reporter, the Mouse House is turning to the mastermind of one of those game-changing franchises to reinvigorate the other, as reports indicate that none other than Marvel Studios president Kevin Feige has been tasked with developing a new Star Wars movie.

Feige had discussed a foray into the Star Wars universe in a late-summer meeting with Kennedy and studio co-chairmen Alan Horn and Alan Bergman, sources say.

Some see this move as a prelude to a larger role for Feige within Lucasfilm, while others say it merely reflects the Marvel executive’s passion for the franchise. A top Disney source says Kennedy remains in charge with no plans for any changes. One knowledgeable source says Feige has told a major actor that there’s a specific role he would like that person to play if and when he makes the movie. [The Hollywood Reporter]

When asked for a comment,  Walt Disney Studios co-chairman and chief creative officer Alan Horn gave the following statement to The Hollywood Reporter:

“We are excited about the projects Kathy and the Lucasfilm team are working on, not only in terms of Star Wars but also Indiana Jones and reaching into other parts of the company including Children of Blood and Bone with Emma Watts and Fox. With the close of the Skywalker Saga, Kathy is pursuing a new era in Star Wars storytelling, and knowing what a die-hard fan Kevin is, it made sense for these two extraordinary producers to work on a Star Wars film together.”

Given Feige’s almost immaculate record producing Marvel Studios films — it was under his stewardship that the MCU became the behemoth we know and love today — it should come as no surprise that Disney is looking to transition one of their most successful producers to one of their most valuable franchises.