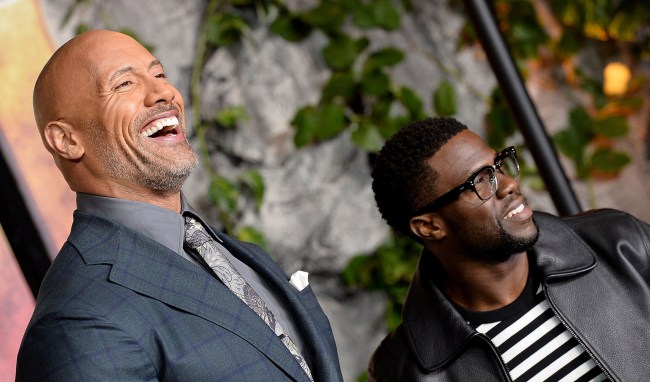 I’m not sure which fictional beef between famous celebrities is the most fun. Ryan Reynolds and Hugh Jackman trolling the hell out of each other is pretty entertaining, especially now that they’ve dragged Jake Gyllenhaal into their feud.

However, the trolling that takes place between Jumanji co-stars Dwayne “The Rock” Johnson and Kevin Hart is far more brutal, and therefore fun in a completely different way.

This week, Hart was shooting a little video with some kids on the set of a movie when he decided to ask them who their favorite Jumanji actor is. He did not get the response he wanted.

“Who’s your favorite person in Jumani?” Hart asked the kids.

“The Rock,” one kid replied. “The Rock and you,” replied another.

After some further discussion, Hart says to the kids, “Why would you say The Rock? This is my video. Why wouldn’t you just say me? You can’t just say, ‘Oh now…’ you said it. Did you mean it?”

Kevin Hart didn’t quite get the response he was looking for…😳😩😂 @KevinHart4real @TheRock pic.twitter.com/tk78Cl3ooi

The kids response when Kevin said did u mean it lmao

Lol he was like “yeah did I stutter wtf”

The kid in the glasses was like “but I said you first”...he’s going places in life 😂😂😂

Seeing everything basically set up on a tee for him to take a swing at his BFF, The Rock couldn’t help but comment.

“Sorry Kev, but kids will always tell the truth,” Johnson write on Twitter. “The heart loves what the heart loves – and congratulate them from Uncle Rock for already being taller than you. Good luck on your shoot, my friend.”

Sorry Kev, but kids will always tell the truth. The heart loves what the heart loves - and congratulate them from Uncle Rock for already being taller than you.
Good luck on your shoot, my friend. https://t.co/IMcmuz2R8R

Yeah, I think I’m going to have to give it to The Rock and Kevin Hart for best fake celebrity feud going on right now.