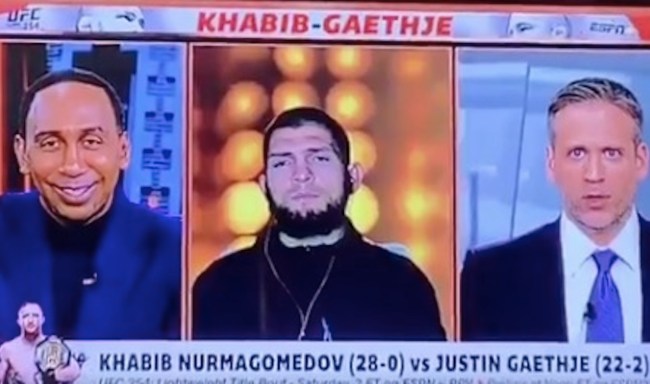 Regardless of which party you root for in the Conor McGregor vs. Khabib Nurmagomedov rivalry, there’s simply no denying the absolute savagery of Khabib’s answer here. This man is just a stone-cold killer and I mean that as a massive compliment. All business, all the time. When it comes to personas that terrify me, silent assassins frighten me far more than those who seek attention in the process. And that’s the exact sort of energy Khabib exudes here.

Perhaps more hilarious than the directness of Khabib are the reactions of Stephen A. Smith and Max Kellerman, who both register on opposite ends of the television host panic-meter.

Kellerman –who wasn’t even the one who asked the question and therefore, in my opinion of intrapersonal verbal communication (comms major at Rutgers U baby, suck on that), shouldn’t be expected to respond — chimes in first, likely knowing that his partner-in-crime, Stephen A., will be nowhere to be found. Kellerman’s assumptions are correct, as Stephen A. found himself somewhere between sporting the grin of a man who knows this clip is about to go viral, or the wry, fear-stricken smirk of a man trying not to soil his boxers on live, national television.

As the definition of a casual UFC fan — I probably tune into a handful of the big pay-per-views and then the random Fight Night whenever the boys and I happened to be drinking — Khabib’s response obviously bums me out, as I’d obviously love to see these two go at it again. Not only do I generally root for McGregor (see: extremely casual interest in the sport) and want to see him in the Octagon as often as possible, but their previous bout at UFC 229 was simply one of the most electric UFC events I’ve ever seen. One can only hope we see it again.