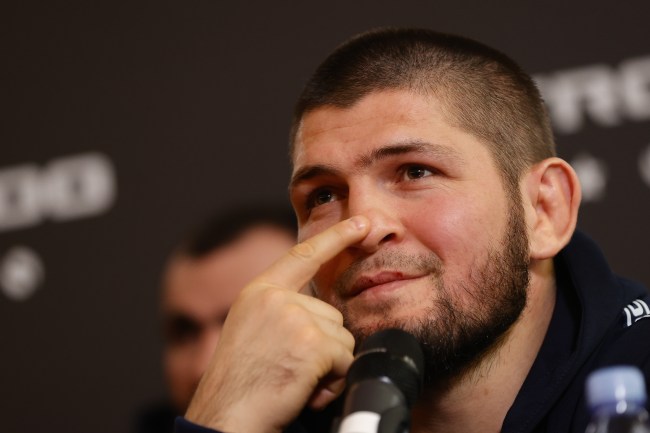 Khabib has been in the news more than expected the past couple of weeks. He recently announced he would start promoting fights for Eagle FC.

One of our writers, Jorge Alonso, was able to capture the moment Khabib fired a warning at the UFC during the Eagle FC 47 presser event last week. While Eagle FC is meant to be a developmental league to groom fighters for the UFC, Khabib also made waves by saying the UFC should be careful with how they treat their fighters.

This afternoon Khabib sat down with the Nelk Boys for a conversation on their Full Send Podcast.

During the conversation, Kyle Foregeard Khabib if he would ever fight in the Eagle FC. Khabib answered he would not.

It was right after this question that Bob Menery chimed in and asked Khabib about the rumors of Jake Paul joining Eagle FC, as well as asking Khabib if he would ever fight Jake Paul.

Here’s a breakdown of that dialogue:

Bob Menery: Were you guys trying to get Jake Paul on there (Eagle FC)? I read it like a day ago in the news.

Khabib: Yeah. It’s like if you want to fight in MMA—because he never fought in the MMA, he doesn’t have experience—we can give him a chance. We can sign him

But he said the only way he’d do it is if he could fight you first.

Menery prodded Khabib a little further to ask Khabib if he could elaborate more as to why he wouldn’t fight Jake Paul. Menery even mentions that Khabib should do it simply because everyone wants to see Jake Paul get knocked out.

Khabib laughs a little after the comment and then pivots to reiterating Eagle FC would at least give Jake a shot at professional MMA.

Khabib also mentioned that he’s seen videos of Jake Paul training MMA and added that he could use some work (video Khabib likely saw above).

He then finished saying Jake’s boxing talents were pretty good but added a qualifier by saying, “Anybody can box.”

As far as Khabib ever stepping into the ring with Jake Paul, the chances are slim to none. But Khabib was firm on his offering of an Eagle FC contract for Jake Paul.

While there’s no telling if Jake Paul would join Eagle FC, it at least furthers the conversation on Paul securing an MMA fight here in the near future.