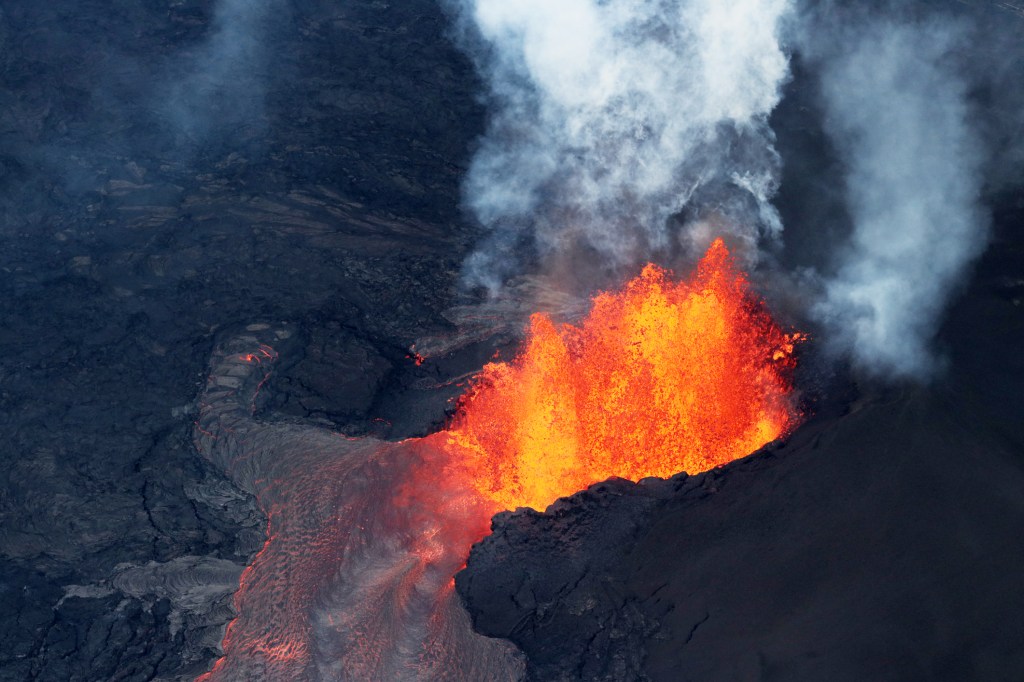 It’s simply impossible to recap everything we’ve gone through this year. We started the year with raging wildfires in Australia. Then came the once-in-a-century health crisis. There were those murder hornets, hurricanes, Harry and Meghan quit the Royal Family!!!! Kim Jong-Un was dead and then he wasn’t. Remember that massive explosion in Beirut that leveled the city? That was four months ago. And then there were countless celebrity deaths which I won’t mention by name because I don’t want to bum anyone out today.

Alas, a massive volcano eruption on Hawaii’s Big Island seems like a fitting way to close out one of the most disastrous years in recorded history. The Kilauea Volcano erupted in the wee hours of Sunday night/Monday morning and triggered a 4.4 earthquake an hour after the eruption.

Footage of the eruption is already circulating far and wide on social media and it looks wild. A warning was issued by the National Weather Service in Honolulu for falling ash. The last time the Kilauea Volcano erupted was in 2018 and it destroyed over 700 homes according to Fox News and it shot out enough lava ‘to fill 320,000 Olympic-sized swimming pools’ which seems like an outrageous way to measure something but I’m 100% on board with this.

Let’s check out the eruption:

Happening now: a new eruption of Kīlauea inside Halemaʻumaʻu

Video from W rim of the caldera just before midnight. As of December 21 at 1:30 a.m. HST, the growing lava lake has almost reached the level of the lowest down-dropped block that formed during the 2018 collapse events. Over the past 2 hours, the lake has risen by ~10 m (32 ft). pic.twitter.com/Qbx1d6hbq4

Lava is cascaded into the summit water lake, boiling off the water and forming a new lava lake. The northern fissure, pictured, was producing the tallest lava fountain at roughly 50 m (165 ft), and all lava was contained within Halemaʻumaʻu crater in Kīlauea caldera. pic.twitter.com/4uEEL7qxOT

I’ve seen a lot of cool natural wonders in my life but I’ve never been close to a volcano when it’s erupting and I can count the number of volcanoes I’ve seen in person on one hand. I’d really love to catch an event like this up close one day.

When the Kilauea Volcano erupted in 2018 an “area more than half the size of Manhattan was buried in up to 80 feet (24 meters) of now-hardened lava” and it took four months before the lava stopped flowing. It’s unclear how long this eruption will last but it’s certainly something that will be making headlines for the foreseeable near future.

Here’s a couple of bros getting in a round of golf with an epic backdrop the last time the Kilauea Volcano erupted in Hawaii.