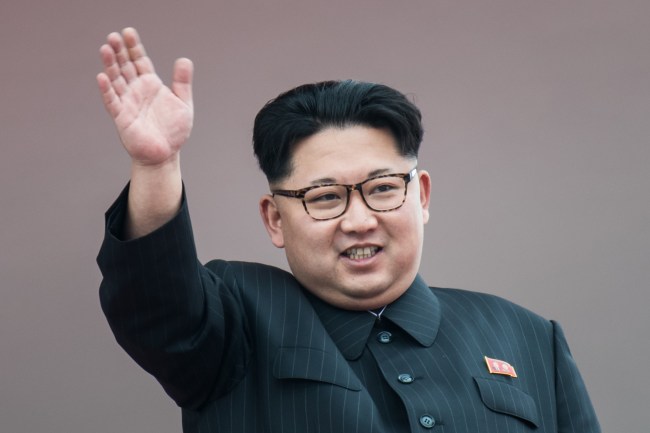 It appears the Kim Jong Un may not be dead after all.

After weeks of rumors that the North Korean dictator had died after failed heart surgery, South Korean news station is reporting that Kim made his first public appearance at a ribbon-cutting ceremony on Friday

KCNA news agency reports that the North Korean leader cut the ribbon at the opening of a fertiliser factory.

It adds that people at the factory “broke into thunderous cheers of hurrah” when he appeared.

The reported appearance – his first since a Workers’ Party Politburo meeting on 11 April – comes amid global speculation over his health.

Before his public appearance on Friday, foreign intelligence services believed Kim was holed up at his ultra-luxurious compound in Wonsan with his 2,000 woman “pleasure squad”.

#breaking Fresh imagery from North Korean leader Kim Jong Un’s compound continues to show train presence, @38NorthNK says. Kim’s train does not prove or disprove anything about his health, but does add credibility to reports Kim is at his luxury beachfront compound in Wonsan. pic.twitter.com/e6gjnPH3z0

Interesting: Kim Jong Un's 165-foot-long leisure boat and some of the floating platforms — visited by Dennis Rodman and his entourage — are visible in these satellite photos. Spring break for KJU? https://t.co/xfj4S9MCU1 pic.twitter.com/RfXImzHpOV

Via The Sun Uk

Kim’s whereabouts are currently unknown, triggering rumours about the brutal dictator’s health after he disappeared from public life three weeks ago.

Some are even suggesting that he’s died — but foreign intelligence services think he’s actually sheltering from the coronavirus pandemic in a secure luxury compound.

And it’s within the walls of his ultra-protected palaces that his Pleasure Squad provide entertainment for high-ranking North Korean officials.

“The Pleasure Squad” was started by Kim Il-sung in the 1970’s and he filled it with underage virgins because he believed having sex with them would allow him to absorb their life force.

The Pleasure Squad or Kippumjo began during the reign of North Korea’s founder, Kim Il-sung, who is still considered the country’s Eternal President, despite dying in 1994.

In the late 1970s, at the height of his power, he sent out his officials to scour the nation for its most attractive young women and girls to act as singers and dancers.

Some of them also began working as maids, but the most sexually attractive were ordered to become “comfort women” for powerful officials.

Many were aged around 13 and 14, and were sometimes even recommended for the sick service by their schools. Kim Il-sung targeted virgins specifically because he believed having sex with them allowed him to absorb a girl’s “ki” or life-force.