Kris Jenner Addresses Rumors She Had Sex With O.J. Simpson In A Hot Tub While Their Partners Slept Inside 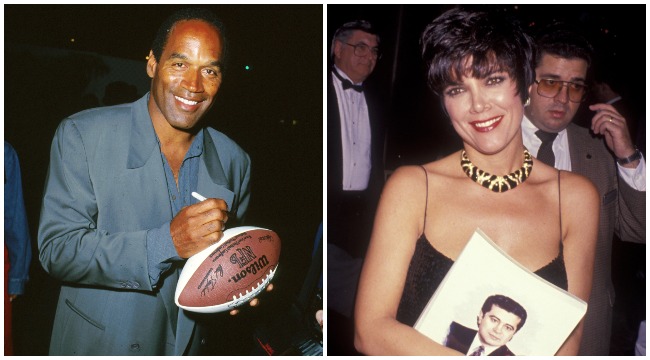 In his documentary, “Who Killed Nicole?” Pardo, who managed Simpson from 1999 to 2012 and has 70 hours of videotape of his former friend, alleges that Simpson bragged about rough sex he had with Kris Kardashian, his best friend’s wife, in a hot tub back in 1990.

On Sunday’s episode of Keeping Up with the Kardashians, Jenner was adamant about these claims being outlandish and false and revealed that she is planning to take legal action to clear her name.

“They printed a story that I was sleeping with O.J.,” Jenner said, according to People. “That fucking piece of shit. It’s really kind of pathetic that when rumors get started the media gives it life and breath and on the anniversary of Nicole’s death. It’s so tasteless and disgusting.”

If the story was fabricated, there sure were a hell of a lot of intricate details in it that could only be made up by a total maniacal sociopath.

The rumor goes that Simpson and his then-wife Nicole were in a hot tub with Robert and Kris while vacationing together before Nicole and Robert called it a night and headed inside. Simpson, then 44, and Kris, 36, were left alone in the water before the O.J. made his intentions clear.

“‘O.J. said he stood up, pulled his shorts down and, I’ll give you exactly what he said: ‘Her eyes bugged out of her head and I f–ked that B until I broke her,’” Pardo recounts on camera in a segment previewed exclusively by The Post.

“That was as messed up as you can possibly get.” [via Page Six]

Pardo then went on to claim that the incident had terminal effects on both relationships, with the Kardashians divorcing in 1991 and the Simpsons splitting in 1992.

O.J.’s former manager also said that the encounter caused Kris physical pain to the point that she asked to be taken to the hospital in the early morning.

Simpson, now 71, boasted of the rendezvous — and the damage his menacingly large manhood had apparently inflicted — to Pardo during a 2003 limo ride from Raleigh, NC, to a paid appearance at an Atlanta nightclub, the ex-manager told The Post.

I’m almost tempted to believe the story because the only kind of person capable of lying about it is a guy who committed a double homicide and led police on a high speed car chase before spending nine years in prison for armed robbery.