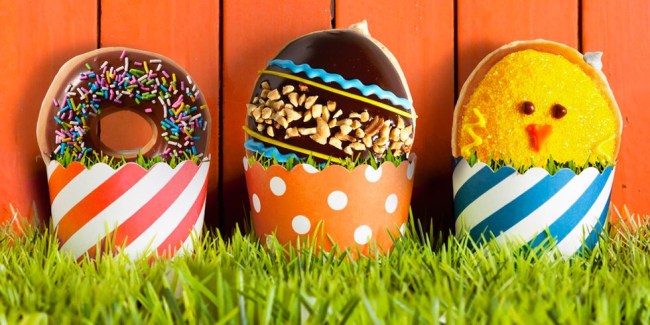 Are you preparing to go on a diet to lose the weight you gained during the winter hibernation? Might want to hold off on those plans for about a month because Krispy Kreme has mouth-watering Reese’s Peanut Butter Egg Doughnut. Chocolate, peanut butter, and donuts. Name a more delicious trio… I’ll wait.

At participating Krispy Kreme doughnut shops in the U.S., you can this delectable Reese’s Peanut Butter Egg Doughnut. Decorated as a festive Easter egg, these special doughnuts have an unglazed shell, stuffed with a peanut butter “kreme,” and dipped in chocolate icing and peanuts sprinkled on top. But you had better hurry over to Krispy Kreme because these yummy treats are available for a limited time only. Let’s hope for your sake the “hot light” is on upon your arrival.

How to make the perfect donut: stuff it with peanut butter and dip it in chocolate. Get one at @KrispyKreme until April 1st! pic.twitter.com/d2eyEDiAZz

After you’re done stuffing your face with the Reese’s Peanut Butter Egg Doughnut, Krispy Kreme will attempt to inflict you with diabetes by offering an all-new glaze doughnut flavor. Earlier this year, Krispy Kreme allowed fans to select the next flavor of donuts by voting. Democracy never tasted so good. A lemon glaze doughnut beat out caramel, blueberry, and maple. Starting on Monday, April 23 through Sunday, April 29, participating Krispy Kreme locations will offer the Lemon Glaze Doughnut.

Krispy Kreme is also selling the Chick Spring Doughnut and is working on a new flavor that will feature ”some of America’s most popular cookies.” Thin Mints? Oreos? Guess we should just give up on that silly lose some weight before the summer idea.