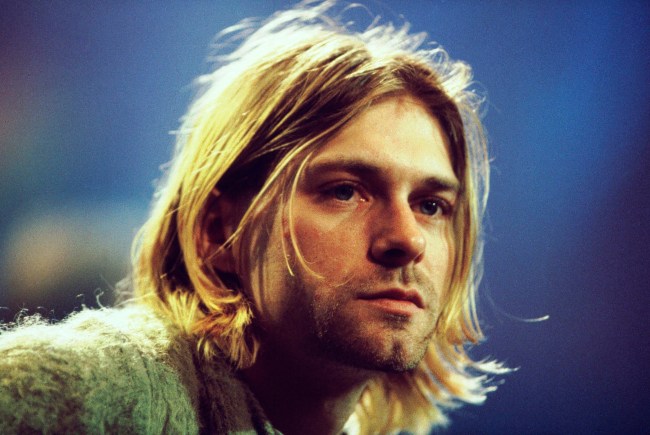 Two weeks from today will be the 25th anniversary of Kurt Cobain’s death. The Nirvana frontman is believed to have committed suicide, but a conspiracy theory argues that Cobain was murdered.

Kurt Cobain was found dead in his home located in the Denny-Blaine neighborhood in east central Seattle, Washington on the morning of April 5, 1994. The person who found the Smells Like Teen Spirit singer was an electrician who was hired to install a security system in the home. The electrician, Gary Smith, found Cobain on the floor in the greenhouse above the garage.

Smith found what he assumed was a suicide note on some planting soil in the greenhouse. “I only read the bottom lines,” Smith said. “(The) bottom two lines said, ‘I love you, I love you’ to someone.”

The Seattle Police Department quickly ruled that Kurt Cobain’s death was a suicide and he died from a self-inflicted shotgun blast to his head. Smith apparently discovered Cobain’s body three days after he had killed himself. However, there is a conspiracy theory that proclaims Cobain’s death was not a suicide, but he was murdered.

Police discovered syringes and heroin at the death scene. Authorities reported that Cobain injected a lethal dose of heroin into his body before he committed suicide. The book alleges that Cobain had way too high of a concentration of heroin in his system to possibly be functioning properly and would probably be comatose.

A doctor who treated Cobain the morning he was found, had this to say about the legendary singer’s death. “We can usually tell a suicide attempt,” the doctor said. “This didn’t look like one to me.”

A Canadian chemist named Roger Lewis echoed the claims that Cobain was too high on drugs to commit suicide. In his 1998 paper the chemist points out that Cobain couldn’t possibly have committed suicide by way of a self-inflicted gunshot wound to the head. There is also a peculiar detail that Cobain made sure to tidy up after himself and put away his heroin gear back into a box. With the copious amounts of heroin that was in Cobain, one would surmise that there would have been a needle still buried in his arm.

Wallace spoke to an FBI expert, who told him that Kurt’s suicide was a “perfect crime.” “If you want to get away with murder, you kill a junkie,” Max suggested. “It’s very easy to make a murder look like an accidental overdose or suicide, it’s the perfect crime and it happens all the time.”

There are also the suspicious claims that Courtney Love may have had something to do with her husband’s death. In the 1998 documentary Kurt & Courtney, filmmaker Nick Broomfield talked to private investigator Tom Grant who alleges that Love may have conspired to kill Cobain. Grant claims that he was hired by Love to find Cobain after he left his drug rehabilitation.

Then there is the accusations by Eldon Wayne Hoke, a punk singer whose stage name is El Duce. This gentleman claims that Courtney Love approached him and offered $50,000 to murder Kurt Cobain. Hoke alleges Courtney wanted to hire him to “whack Kurt Cobain” and “blow his f*cking head off.” El Duce alleges that Courtney instructed him to murder Cobain and “make it look it like a suicide.”

El Duce passed two lie detector tests about Love offering him money to murder Cobain. Two days after El Duce did this interview, Hoke was killed when he was hit by a train in Riverside, California.

Another conspiracy theorist who believes that Cobain did not kill himself is Hank Harrison, Courtney Love’s own father. Her father alleges that Courtney Love is involved in Kurt’s death “directly or indirectly.” “I can’t prove she pulled the trigger, but I can prove her involvement to a high degree of certainty,” Harrison said.

Then there is the question as to how or why Cobain used such a large gun to shoot himself in the head.

Many argue that the letter was actually Kurt writing about wanting to leave Nirvana because he didn’t have the same passion for music as he once did. Kurt Cobain’s alleged suicide note doesn’t mention anything remotely suicidal until the last four lines. And the last four lines appear to be in different handwriting than the rest of the handwritten letter.

Kurt Cobain and his suicide note. The Nirvana front-man died today in 1994. pic.twitter.com/iDP3Ig4784

Courtney Love has never threatened legal action or sued any of the people who have spread conspiracy theories that she was involved in the murder of her husband. Love refutes any accusations that she killed her husband.

RELATED: Conspiracy Theory Says Tupac Is Still Alive And The Proof Is His Nike Sneakers