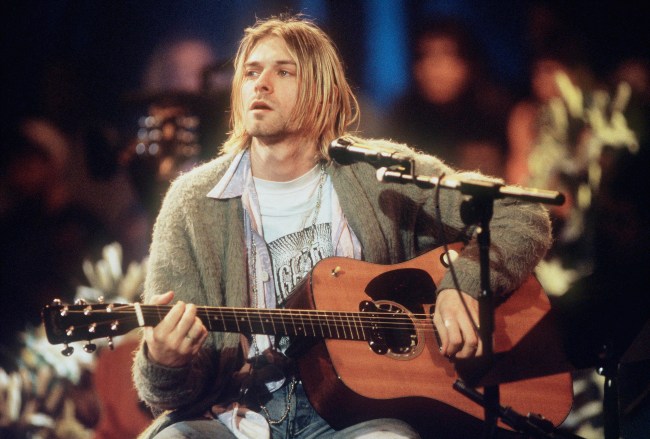 A doodle drawn by the late great Kurt Cobain sold for nearly $300,000. The self-portrait of the Nirvana frontman titled “Kurdt Kobain Rock Star” was drawn in 1992 in Singapore.

The self-portrait caricature drawing created by Cobain shows a stick figure version of the Nirvana rocker playing the guitar. There is a handwritten message that says, “I don’t know how to play and I don’t give a hoot!”

“Cobain made the drawing and gifted it to Jacque Chong, a freelance photographer who worked with Cobain during Nirvana’s Nevermind album promotional tour in Singapore in 1992,” according to the listing from Julien’s Auctions.

“The drawing is done with black felt pen on TNT Music Centre [sic] in Singapore stationery with a white matted cardboard frame,” the listing from the California-based auction house.

“Independent label Dover Street Market Ginza has previously reproduced the drawing on its fashion apparel, with Chong’s permission,” Julien’s Auctions stated. “The additional photographs on view are of Cobain and Chong in his hotel as well as a group photograph that includes the two.”

SOLD for $281,250! A self-portrait caricature by Kurt Cobain playing the guitar, signed on the left of the drawing "Kurdt Kobain Rock Star" and handwritten on the right "I don't know how to play and I don't give a hoot!" Sold now in our Music Icons at https://t.co/TiME89uOXn! pic.twitter.com/jvfHVeyXdQ

RELATED: Someone Just Bought A Dirty Paper Plate Used By Nirvana’s Kurt Cobain For An Obscene Amount At Auction