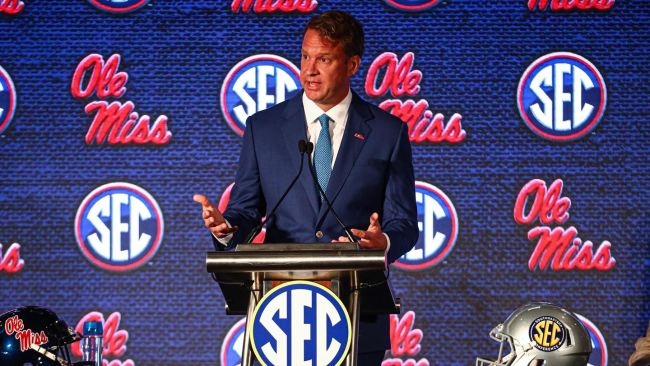 Lane Kiffin is in no rush to get his ears on Kanye West’s new ‘DONDA’ album, but he needs it to drop before September 6th. Ole Miss football is scheduled to begin the 2021 football season against Louisville on that day at Mercedes-Benz Stadium.

In the meantime, Yeezy is literally living out of the stadium.

The 46-year-old head coach let the 44-year-old musician know that he and his team will need the locker room. He also extended an offer for Mr. West to join the Rebels on game day in Atlanta. He’s already there, so why not swing by the season opener for the most exciting program in the country?

Kiffin and Kanye go back to 2017, when the latter sent the former a pair of Yeezy shoes.

Kiffin invited Kanye to a game at Florida Atlantic, but he did not accept. Perhaps the allure of a SEC team at Mercedes-Benz Stadium will be a bigger draw?

As college football quickly approaches, as does DONDA. The release of the album, named after West’s late mother, has been exactly what you should expect from Ye. It was expected to be released at midnight a few weeks ago, following a performance at Mercedes-Benz.

However, in typical Kanye fashion, it did not come out on time. He decided to take more time, as he always does, to perfect the mixing, add new verses and fine-tune the 24-track record.

He has been live-streaming his every movement as he sits in his makeshift room at the stadium and perfects DONDA.

The stream has been 24/7 on the room. Even during workouts and sleep.

The culmination came on Thursday night when West played his album in front of another sold-out crowd in Atlanta. It sounded much better the second go around.

At the end of the listening party, Yeezus ascended to the heavens.

#DONDA was crazy. @kanyewest i need this album. Sonically this is crack❤️😭🎧 pic.twitter.com/FVoYaMEZUx

Kiffin must have liked what he saw and asked him to get on the Lane Train!