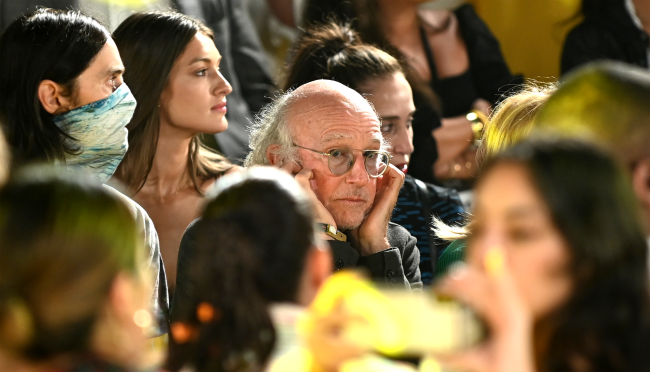 Two weeks ago we wrote the headline: “Was Larry David Being Held Hostage At New York Fashion Week And The U.S. Open?”

Because it looked like Larry David was being held hostage at New York Fashion Week and the U.S. Open.

The Seinfeld and Curb Your Enthusiasm creator appeared to be hating his life, plugging his ears while attending a show at Fashion Week and again at the U.S. Open.

While the internet had a lot of fun with Larry David’s reaction to the noise at both events, making tons of jokes and creating numerous dank memes, his daughter Cazzie David was a whole lot less amused.

why would she invite me to a fashion show? i hate fashion. I hate fashion shows. they’re just so loud and i’ve been getting these ear aches lately. i mean, i’m larry david, i’ll probably just get thrown in the back anyway. i’m in the front row? are you kidding me? pic.twitter.com/L41oLf590R

Speaking with Alexandra Cooper on the Call Her Daddy podcast, Cazzie David said she found the images of her dad Larry “disturbing.”

“This is so not gonna be what you want to hear from this or what anyone would want to hear,” said Cazzie. “I found it so, like, disturbing. Like I’m happy everyone thought it was so funny and relatable. For me, this was like a man who was dragged to some place he doesn’t want to be, that he didn’t know what it would be. He doesn’t know what a fashion show is.”

“Someone was like, ‘Will you please come to this fashion show with me?’ But he didn’t want to go, obviously, like I know him. So the moment that’s going viral, that’s like me watching my dad… he looks like he’s having a breakdown,” she continued. “Like truly. Like, he looks so miserable and I obviously don’t like seeing my dad miserable whether or not it’s funny.”

Cazzie added, “He would never also do something to try and be funny. I don’t think he’s ever done anything in his life like that to be funny. He’s like, ‘If you’re funny, great, but if you’re not funny, don’t try to be funny ever.'”

On the plus side, Larry seems to have recovered and appeared to be having an absolute ball at the game between the Los Angeles Rams and the Tampa Bay Buccaneers over the weekend.

Larry David is always out having a blast pic.twitter.com/t8Hutfrmhz