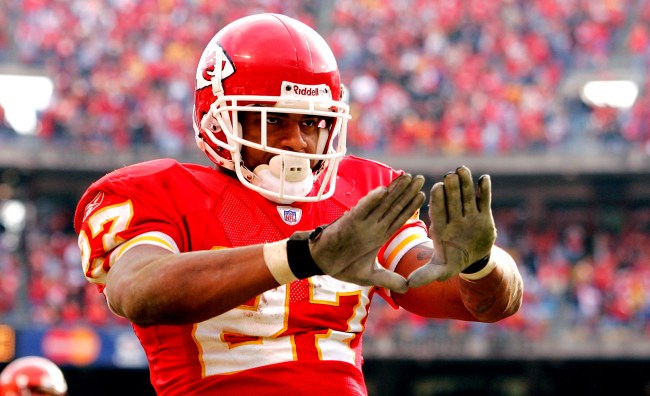 Former NFL running back Larry Johnson is one hell of a follow on Twitter. In the past he has spouted numerous bizarre thoughts and conspiracy theories including claims about “the NFL and NBA’s effeminate agenda”, LeBron James worshipping Lucifer, the Super Bowl halftime show being a child sex trafficking ritual, Dwyane Wade “sacrificing” the transgender child he had outside of marriage, Kobe Bryant – both in life as well as in death, and weighing in on the latest Fury-Wilder fight.

This week LJ was back at it again, taking aim at Cardi B for her interview with Democratic presidential nominee Joe Biden for the September issue of Elle magazine.

A female rapper who went live on Instagram for the world when she had explosive diarrhea SHOULD be directly linked to a Democratic Presedintial canidate. https://t.co/y7iIKeOXDQ

Johnson is a big fan of claims and theories about the Illuminati, the occult, and the many Satanic “secret societies” he believes are running the world. Apparently now part of these groups’ plan is somehow tied to Cardi B’s “explosive diarrhea.”

“The hilarious part in all this, Cardi B AND Cardi B’s fan base was Joe Biden’s targeted demographic for the 1994 Crime Bill he proudly co-signed…y’all really deserve your own downfall. Enjoy morons,” Johnson added.

The hilarious part in all this, Cardi B AND Cardi B’s fan base was Joe Biden’s targeted demographic for the 1994 Crime Bill he proudly co-signed...

Reactions to Johnson’s odd tweets were pretty much what you’d expect from people who follow Larry Johnson on Twitter.

It's comical, the media literally wants us to take political advice from strippers at this point lol

What a world. Let’s take a look at some of LJ’s other recent tweets for a little more inspiration and guidance.

“We Are One” and “Stronger Together” Is B.S. This crippling Masonic system bases everything on color…

As I proudly stated before, they’ll do every study where we appear downtrodden, but won’t study who owns the monopoly on:

Call it an Conspiracy all you want, you can’t disprove Coincidence.

They are going to surely delete my account. Hahah pic.twitter.com/KPd3peRyAr

I feel sorry for her next of kin, a platform of this magnitude and in a very short time is not cheap.

It’ll be fun-ny to watch her forced hand symbolism, in her very first special, ever. https://t.co/B1KMnnlEEx