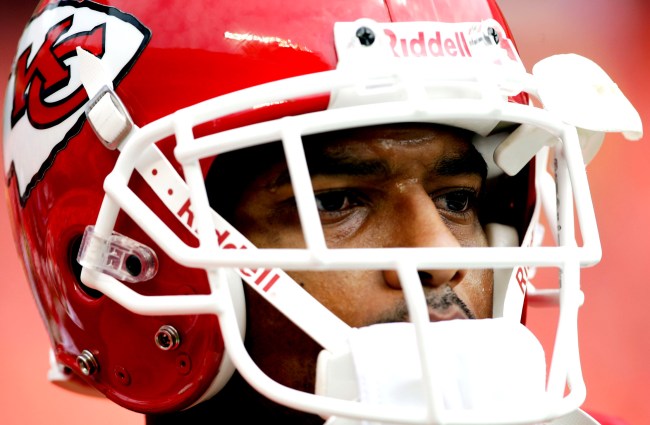 Former NFL running back Larry Johnson, who played for parts of nine seasons with the Kansas City Chiefs, Cincinnati Bengals, Washington Redskins and Miami Dolphins from 2003 to 2011, either (a) actually believes all the occult and Illuminati nonsense he spouts on social media, (b) has suffered some form of brain damage from his over 1,900 carries in the NFL and college, or (c) is a troll of the absolute highest order.

In the past, Johnson has made numerous wild claims including “the NFL and NBA’s effeminate agenda”, LeBron James worshipping Lucifer, calling the Super Bowl halftime show a child sex trafficking ritual, and attacking Dwyane Wade for “sacrificing” the transgender child he had outside of marriage.

One of LJ’s latest targets, given the fact that a massive memorial was just held in his honor is, of course, Kobe Bryant.

On the day the memorial was held in Los Angeles with a plethora of luminaries in attendance, speaking and/or performing, Johnson just couldn’t help himself and expressed his as usual batshit thoughts, both about the memorial itself as well as Bryant’s “Success for the Successful” logo.

XO: Union of both sex organs

Aleister Crowley’s: Law of Reversal, upside down is the Sigil of Lucifer. pic.twitter.com/F1V8iD9I1B

Johnson also sideswiped one of his favorite targets Dwyane Wade along the way.

From #girldad to #transdad in two short rituals. 😂

This isn’t the first time Johnson has gone after Kobe Bryant since the NBA legend’s death either.

Immediately after the crash, he referenced “secret societies” being behind Kobe’s death happening that day after LeBron passed him on the NBA’s all time scoring list.

Right after Lebron passes him 3rd on all time scoring list, last night?

….this between secret societies, I’m going to stay out of this one. https://t.co/HAxGD5LPtE

He also has previously attempted to tie Bryant to Satanism.

“666” in Satanism is also reversed, since they believe Lucifer is god, its the highest form of perfection, unholy trinity, mans attempts to become like God…

And just because it’s what he does, Johnson also had a few nutty as fuck thoughts on the Fury-Wilder fight.

Wilder underperformed so Fury can sing ‘American Pie’ at the end of Black History Month…👏🏾….👏🏾…..👏🏾

The awake know boxing and most sports are fixed to fit a narrative and it’s always one or the other sleep doctrines:

The All Mocking Tongue (Kali, Hindu)#BookofObadiah is this systems future, so their rebellion to this truth is these rituals & spells you don’t get, because you’re not meant to. pic.twitter.com/kPNEVIaACm

Johnson is so far gone he makes way-out-there conspiracy theorists look like scholars.