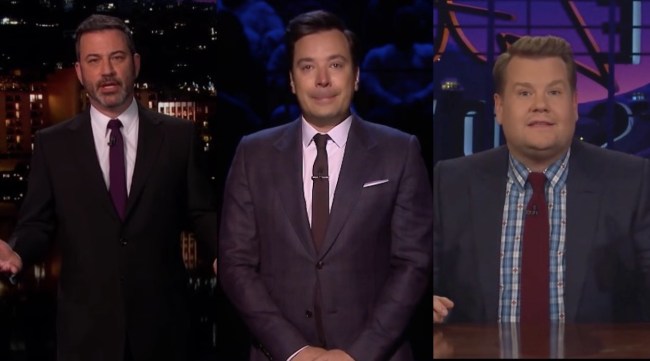 As the world still tries to process the sudden and tragic death of Los Angeles Lakers legend Kobe Bryant, tribute form all corners of the globe continue to pour out.

The Los Angeles-based Kimmel, who had an obvious friendship with Bryant, opted to forgo a traditional show and instead opened Monday’s episode with a eulogy about Kobe Bryant before re-airing old interviews with him and his teammates.

The Tonight Show with Jimmy Fallon

As for Jimmy Fallon, while he moved forward with a traditional episode, the longtime The Tonight Show host became overcome with emotions as he eulogized about the late Lakers icon and told an awesome story about the two of them making a beer run for a party during the beginning of their careers.

James Corden, who is based in Los Angeles as the host of The Late, Late Show, also paid tribute to the fallen basketball icon by pointing out that despite the fact that he grew up in a basketball-less Britain, Kobe Bryant was still a massive star.

Bryant, just 41-years-old, passed away in a California helicopter crash with his 13-year-old Gianna Marie and seven other victims on Sunday, January 26.

Drafted with the 13th overall pick by the Charlotte Hornets in the year 1996, Bryant spent all 20 of his NBA seasons with the Los Angeles Lakers and won five NBA titles during that time. He retired in the year 2016 and heroically scored 60 points in his final game.