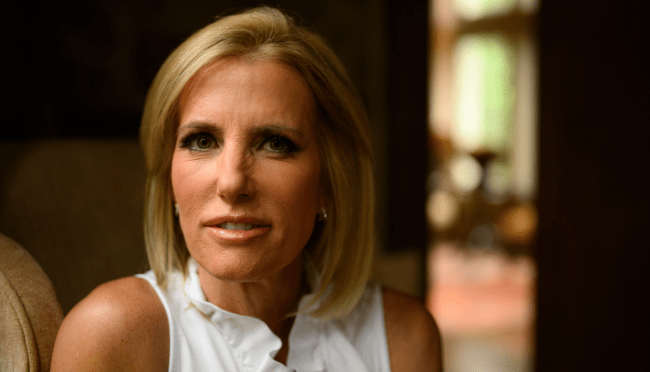 In case you weren’t aware, one of the more popular original shows on Netflix is called You. Fox News host Laura Ingraham is apparently among the group of people who doesn’t know that.

Monday night, while Ingraham was speaking with her guest Raymond Arroyo, he brought up the fact that in season three of You the subject of the measles vaccine was introduced.

It was at that point that things went completely off the rails and turned into a 21st century version of Abbott and Costello’s “Who’s on first?”

“I was watching an episode of You where measles came up,” Arroyo tells Laura Ingraham, beginning the mayhem.

“Wait, wait, wait. When did I mention measles?” Ingraham asked with a perplexed look on her face.

“Wh…wh…what was on me?” Ingraham said with a laugh. “What are you talking about?! Are you hearing what I am saying? I never had the measles.”

“The measles and the vaccine episode was on You,” Arroyo tried to clarify.

“We never did a measles and vaccine episode! Is this a joke?” Ingraham replied.

“Raymond!” Ingraham interjected again. “I’ve never had measles. What are you talking about? This is stupid!”

“It was an episode of a show, Laura,” Arroyo tried to explain yet again.

“What’s it called?” Ingraham asked. “What is he talking about?”

“I’ve never done a show on measles!” Ingraham once again exclaimed. “I just completely give up.”

“It’s a show called You on Netflix!” Arroyo tried one more time.

“There’s a show called Laura Ingraham on Netflix?” she then asked. “What are you talking about?”

“Never mind,” replied an exasperated Arroyo. “Moving on to Adele. I can’t explain this to you.”

“What is he talking about?” Ingraham asked one more time, before Arroyo finally, mercifully changed the subject.

And this, everyone, is the greatest video of all time: pic.twitter.com/Kf3jHXUliQ

I literally cannot stop laughing at this.

Nor could a lot of other people apparently.

#SNL couldn’t do better than this. @nbcsnl

Watching that reminded me of this scene. I wanted to smash my head against a wall pic.twitter.com/4OOHqlhqFF

Wait the show retweeted this? pic.twitter.com/biiFFXGcjA

Yes, yes they did, as did the star of the show.

Definitely a bit. His delivery is great tho https://t.co/8UFfy7IpZf

Also… this too is great… watch it.

no other way to watch this pic.twitter.com/igtYpJdE1D

By the way, You is a psychological thriller slasher show… on Netflix… based on a book of the same name that stars Penn Badgley as a psychopathic serial killer and I highly recommend it.