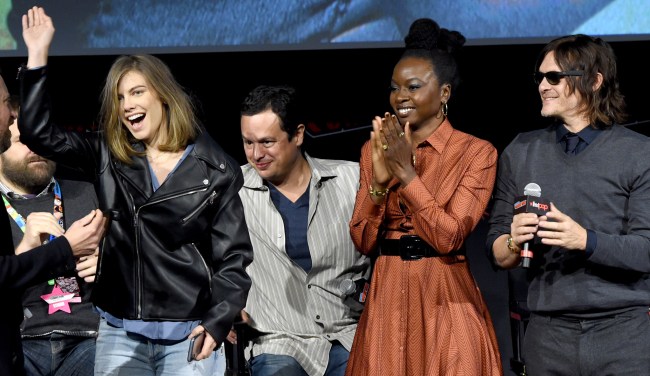 Fans of The Walking Dead have had it rougher than most TV show fans. Every episode of season 10 was shown on AMC… but one: the season finale.

Thanks a lot, pandemic.

The season 10 finale was supposed to air on April 12th. Unfortunately, after 15 episodes, show number 16’s release was postponed due to COVID-19 and will now air on October 4th.

However, as something of a reward for their patience, will be getting six additional episodes in what amounts to an extended season 10.

“COVID has disrupted a lot of things for every workplace, including ours. The writers room for season 11 has been going remotely for the past few months. We haven’t been able to start production, but we’ll get back to work as soon as we safely can,” showrunner Angela Kang revealed during the show’s Comic-Con@Home panel in late July as reported by Digital Spy.

“We will not be airing season 11 episodes this year as we normally would in October. But we’re excited to announce an extended season 10 and there will be six extra episodes to follow the finale and those will run in early 2021 if all goes well.

“We’re working on those now and we’ll have more to share soon… Basically it’s an extension of episodes beyond the finale.”

During an appearance on Live with Kelly and Ryan this week, Cohan shared some her thoughts about those six extra episodes as well as what’s going on with season 11 – the show’s final season.

“I’m in Georgia now getting ready to shoot,” said Cohan, “which is now going to be part of the still season 10. We’re doing this big chunk of episodes, and then next year we come back and do 24 more.”

Unfortunately, as mentioned, it will be the show’s last season.

“We have two calendar years’ worth of stuff to shoot, so it’s still going to be on television for a significant period, but I feel two ways about it,” Cohan said about shooting the show’s final season.

“I kind of got excited when we first announced [it was ending], just because fans and everybody who’s watched all this time and been part of our invested family is… We’re so lucky we’ve been going so long and it’s so exciting to say, ‘Okay, let’s all key in for this final season and watch it together’, and it makes me appreciate it.

“And then, people are so hungry for our whole universe still that it’s exciting because there will be spin-off possibilities.”

One spin-off that’s already been announced will be centered on Daryl Dixon and Carol Peletier and air beginning in 2023.

Our site MIGHT be experiencing some heavy traffic for some reason. So in the meantime, here's the full AMC press release: pic.twitter.com/ZwnSaz4J6o

Maybe Cohan and her Maggie Greene character can find a spot on one of those shows. Or better yet, perhaps she can star in her own Walking Dead series. I mean, at this point, why stop at five? Maybe they can take us back and show us what she was doing with Georgie during the almost two years she was gone.