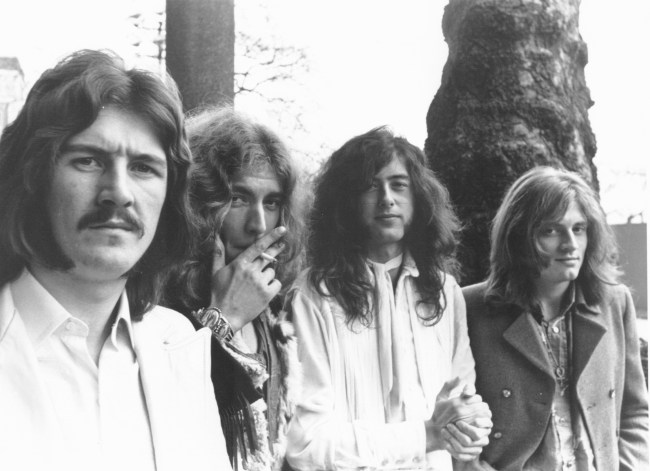 Led Zeppelin is one of the most legendary rock bands ever, and, while their music has lived on for decades, so, too, have some of the stories about their rockstar lifestyles. Being in a rock band usually means long hours playing music, long hours squiring women around and long hours of partying. Like, if there’s a prerequisite for being a badass rock legend, having the skill to down an entire bottle of Jack Daniel’s in a night is it — not that that’s a good idea.

While Led Zeppelin might not be in the limelight these days, that doesn’t mean that their outrageous stories from years past are any less interesting. Hearing them is like talking to your grandpa, having him give a recap of all the wild sh*t he and his pals used to do way back when, when people just didn’t seem to give a f*ck about most things.

That said, one recent Led Zeppelin story seems a little bit more f*cked up than a few of the others, because it involves the band’s original drummer, John Bonham’s, son talking about how he did a whole bunch of cocaine with the band at just 16 years old. John Bonham died in his sleep after drinking 1.5 liters of vodka in a 24-hour timeframe and choking on his vomit, yet the band seemed to celebrate what his then teenage son could handle.

“Jimmy was the first one to ever give it to me,” he told Stern on his Sirius XM radio show. “We got called to his room. … I was 16 at this point, and there was a woman on the floor with a collar on, meowing, and he had this grinder thing … and he turned it over and he went, ‘Here you go,’ and I went, ‘Thanks.’ He’s like, ‘You’ve done this before, right?’ And I’m like, ‘Yeah, of course I have.’ So he handed it over and I just did all of it, and he went, ‘Just like your father—you know, that was supposed to be for all of us.’”

“I was taking it wrong,” he told Stern. “Sometimes when I got really drunk, they’d go, ‘He’s just like his old man.’”

There are a lot of legendary rockstar moments, but this is one that Led Zeppelin probably wishes didn’t happen. Luckily for Jason Bonham, he’s been sober now for 17 years, so he’s been able to avoid trying to keep up with some of the ways Zeppelin used to party.