Leonardo DiCaprio Had A Way Better Labor Day Weekend Than The Rest Of Us, Playing Beach Volleyball With His Girlfriend 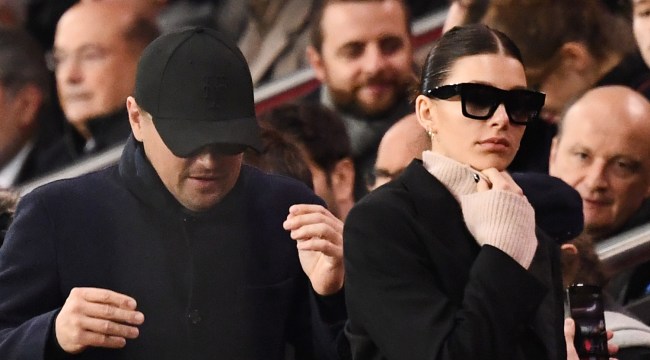 The last time we saw bro king Leonardo DiCaprio playing some beach volleyball he was getting smashed in the face with the ball. Naturally, the internet immediately turned him into a meme.

Of course, at that time he was playing beach volleyball with some of his bros and we all know how competitive that can get. Doesn’t matter if you have a net worth of $245 million or won an Academy Award, bros are gonna bro.

Over Labor Day Weekend, DiCaprio revisited the beach for another round of volleyball, only this time Leo, 44, was joined by his 22-year-old girlfriend, model Camila Morrone, Robin Thicke, 42, his girlfriend April Love Geary, 24, Alexander DeLeon and some other friends.

Weekend fun! Leonardo DiCaprio and Camila Morrone were spotted out on Saturday in Malibu playing beach volleyball with friends while enjoying the long holiday weekend pic.twitter.com/V3rSJsuloQ

DiCaprio also managed to avoid taking a ball to the dome this time, so yeah, he definitely had a better Labor Day Weekend than we did.

Back in July, Morrone, who refers to none other than Al Pacino as her “step-father,” was forced to defend her relationship and 22-year age gap with Leo after she received comments on Instagram like people telling her that he will “dump you in three years.”

Four years ago, someone did a study of DiCaprio’s many girlfriends and discovered that they almost without fail have been models aged 25 and under.

Gisele Bündchen and Bar Refaeli, with whom DiCaprio shared his longest relationships, dated him while they were each 20 to 25 years old; DiCaprio was in his mid-to-late 20s and early-to-mid-30s, respectively. In 2011, DiCaprio, then 36, dated 23- to 24-year-old Blake Lively. In 2012, he dated 22- to 23-year old Erin Heatherton. The actor had a literal May-December relationship with Toni Garrn, who DiCaprio dated from May 2013, when he was 38 and she was 20, to December 2014. His most recent romance was with [Kelly] Rohrbach, who turned 25 during their half-year stint

Since then Leo has gone on to reportedly hook up with Dakota Johnson, model Bryana Holly, model Roxy Horner, model Chelsey Weimar, model Victoria Lee Robinson, model Ela Kawalec, model Nina Agdal, model Paige Watkins, model Lorena Rae, and model Juliette Perkins, all 25 or younger at the time, as well as Morrone, who was just 20-years-old when they began dating.

So, with Morrone now being 22, is it really a stretch for someone to think that she too will be left heartbroken by Leo before she turns 25?

“They seem pretty serious. It’s definitely not a casual relationship. Camila spends a lot of time at his house,” a source told People in July. “Camila is long known as Leo’s girlfriend. And Leo introduced her to both of his parents long ago.”