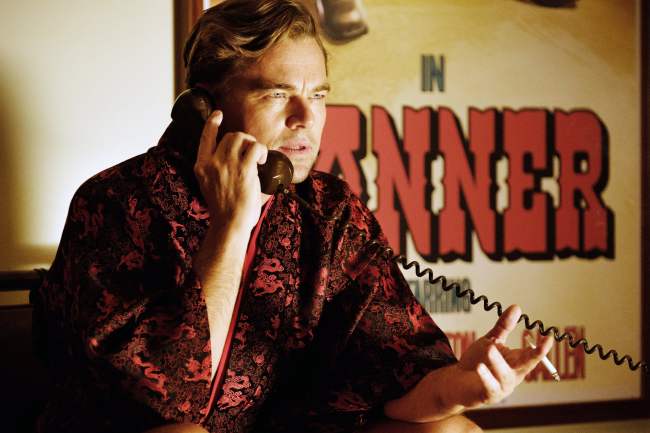 Our man Quentin Tarantino has been doing the media rounds recently as he’s been promoting his new novel Once Upon a Time in Hollywood, and let me tell ya, it’s certainly worked, as I went out and purchased the novel myself. Not only that, but I also rewatched Once Upon a Time in Hollywood (the movie) before diving into the book, and it’s now worked it’s way into my Top 3 Tarantino films behind Pulp Fiction and Inglourious Basterds. It’s just so immaculately well-acted and arguably the funniest of Tarantino’s films, as the dark-comedy combo of Leo DiCaprio’s borderline-alcoholic Rick Dalton and Brad Pitt’s free-wheeling stuntman Cliff Booth is just sublime.

Rewatched OUATIH before reading the novel and… pic.twitter.com/udiMUVMj6G

Tarantino should consider himself lucky that he’s a talkative guy, as he’s been able to drop a new tasty tidbit about his work during almost every interview he’s done, including this most recent bit about having to cut he and Leonardo DiCaprio’s favorite scene out of the film: a phone call between Rick Dalton and child actor Trudi Fraser from the Lancer series that Rick worked on.

RELATED: If Quentin Tarantino Ever Made ‘Kill Bill 3’, He’d Cast Uma Thurman’s Daughter, Have Them On The Run Together

“That was my favorite scene in the script. So the idea that that wouldn’t be in the movie was unfathomable,” Tarantino said. “I think it was probably Leo’s favorite scene that he shot. We were in tears. It was the only time … I’ve gotten misty-eyed every once in a while when I was shooting this scene versus that scene. But that thing, I mean, Julia [Butters] was in tears every time we finished every take.”

“The reason it’s not in the film is a two-fold one,” Tarantino said. “It seems like an ending to the movie. Which actually was okay in the script, because in the script I looked at everything that happens in February as part of a three-act structure. And then the stuff that happens on the night of the murder as an epilogue. But that was the wrong way to think about it. Once we started putting the movie together, the stuff that happens in August isn’t an epilogue. It’s the third act. We’ve got to look at it that way.” [via Cinemablend]

The scene that Tarantino is talking about, in fact, can be briefly seen in the trailer for the Once Upon A Time In Hollywood novel (yes, that’s right, a trailer for a book).

The reveal also helps explain why Butters’ character is wearing a pajamas outfit in the official poster for the film but not in the movie itself:

Tarantino’s novelization of Once Upon A Time In Hollywood, which includes the phone conversation that he was forced to cut, is now available to purchase.