Oh Hell No, Now There’s A Robot That Bleeds, Breathes, Pees, And Has A Pulse? We’re All So F**ked 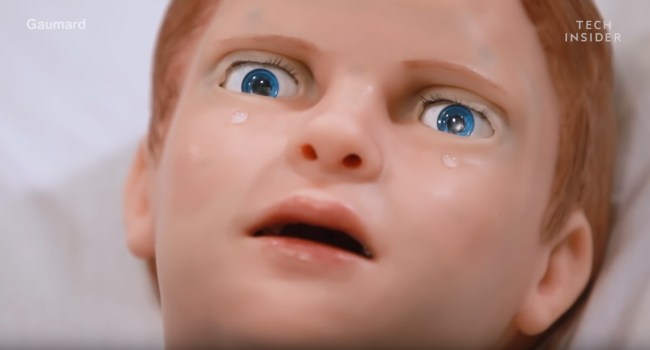 Welcome to your new nightmare. The robot uprising just got a whole hell of a lot closer as now there is a lifelike robot that bleeds, talks, cries, pees and copies other human behavior.

As if a robot “accidentally impaling a human with ten foot-long metal spikes wasn’t enough proof of the impending robot revolution, now we’ve got to deal with this.

“Hi, I’m Pediatric HAL. I can show you how I feel by moving my face and my eyes,” the creepy robot announces at the start of the video below.

So what in the Sam Hill exactly is a Pediatric HAL? Glad you asked.

According to the narrator of the video, “HAL is part of a line of medical training robots manufactured by a company called Gaumard. Gaumard makes humanlike robots that simulate childbirth, newborn care, surgery, and trauma wounds. Pediatric HAL is designed to mimic the reactions of a child around five years old. During training, doctors, nurses, and first responders all practice various simulations on HAL before treating real patients.”

See? That’s how the robots are going to suck us in. Telling us it’s “all for our own good.” Then, whammo, one of them sends 24 humans to the hospital after dousing them with bear repellant.

Pediatric HAL doesn’t just move his face and eyes and talk, he also breathes, cries, his head moves back and forth, and has a blood pressure, pulse, pulse oximetry, and a glucose measurement. His goddmamn pupils pupils even dilate. Oh yeah, he also bleeds and urinates.

Dammit, I called it a “he.” See? It’s already happening. Lulling us right into their takeover.

“We have a concept called suspending disbelief. So it’s the fact that, okay I know that it’s a mannequin, it’s a simulator,” explains Henry Henao, Director and Clinical Professor of Nursing at Florida International University. “They know it’s a mannequin and it’s made of plastic and electronic parts, but they look beyond that. So we ask them to forgive the fact that it’s not a real patient, and once they break through that they really start making very human connections to the patient in front of them. And they, yeah, it kind of melts away.”

JUST AS THE ROBOTS PLANNED IT.

For example, one time HAL started to cry and one of the nurses actually picked him up and tried to console him. She actually hugged him.