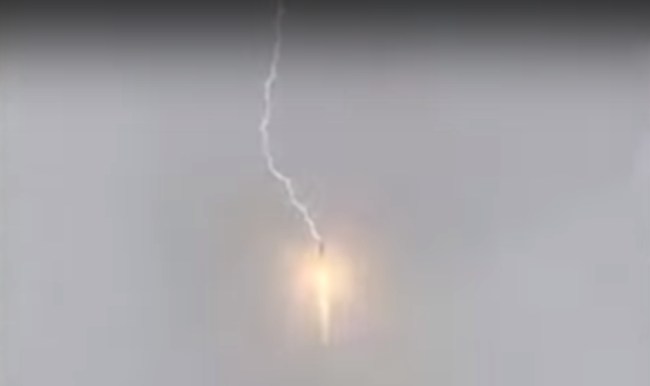 A crazy thing happened on Monday when a rocket took a direct lightning strike during mid-launch. The unbelievable moment was captured on video when a Russian rocket barreled through the electrifying weather conditions.

Russian space agency Roscosmos launched a Soyuz 2-1b rocket from the Plesetsk Cosmodrome, which is about 500 miles north of Moscow. Footage captures the exact second the lightning bolt slams into the Soyuz rocket about 10 seconds after the launch.

The lightning strike didn’t adversely affect the rocket and it continued on its mission. The Soyuz rocket continued into low-Earth orbit for the next 3.5 hours and delivered a Glonass-M navigation satellite into orbit on schedule as planned.

“Lightning is not an obstacle to you,” Roscosmos director Dmitry Rogozin said of the lightning strike as he congratulated the Glonass-M launch team and military Space Forces.

“The weather is not an obstacle and we [the Space Force of Russia’s Aerospace Forces] are all-weather troops,” said Plesetsk Cosmodrome chief Nikolai Nestechuk. “This is yet another proof that lightning cannot damage our aerospace weapons.”

The satellite was also unharmed by the lightning strike. “A stable telemetric connection is established and maintained with the spacecraft,” the Russian Ministry of Defense said. “The on-board systems of the Glonass-M spacecraft are functioning normally.”

This is actually not the first time that a rocket took a lightning strike while leaving the atmosphere. NASA’s Saturn V rockets were hit twice during the Apollo 12 mission on November 14, 1969. The spacecraft had some minor instrument failures but was still able to continue their mission to the Moon as planned.