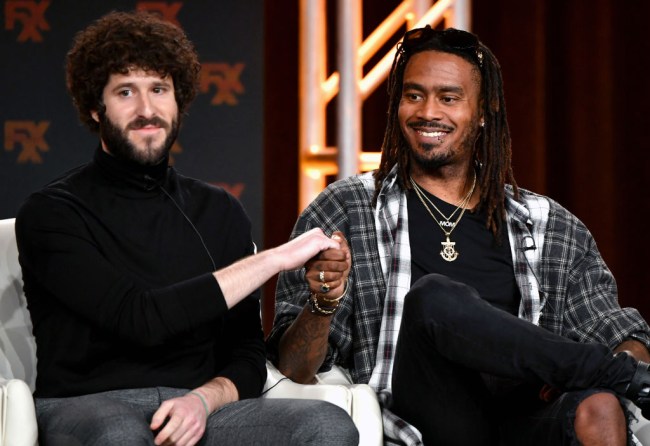 Lil Dicky’s hit show ‘Dave’ on Hulu and FXX is an undeniable success just six shows into the first season. It’s one of the top things helping us get through this quarantine right now if we’re being honest, but one of the biggest stories of the show has been Dicky’s sidekick and hype man, GaTa.

GaTa’s success and likeability on the show have turned him from a ‘sidekick’ to a full-blown star. I sat down with the man himself for an interview on The Brilliantly Dumb Show and immediately understood the hype. There is a natural enthusiasm for life and his day to day job that is hard to ignore. It took about five minutes into our conversation for him to make a bombshell statement about his early life on tour with Lil Wayne was like.

Before there was Lil Dicky, GaTa got his start in the industry with being on tour with rappers such as Tyga and Wayne. When I asked the rapper how many blunts he smoked a day with Lil Wayne his response was epic.

“When I was with Wayne I was star-struck, he didn’t know it but I was star struck,” Gata explained “Wayne is a boss, he got a personal blunt roller, he has somebody in his camp just rolling up all day. I’m pretty sure he was on payroll and all that, but when we first started I said, ‘I got to document how many blunts we smoke.’ So, the first day I fell asleep at like 55 blunts, I think it was 53 or 55, I have it in my notes somewhere but I smoked 55 blunts with him in one day.”

Check out the story from GaTa himself below, the video will autoplay where the story begins.

Fifty-five blunts? I truly do not know if that is humanly possibly. I can not imagine how useless I would be around blunt 10, but leave it to the co-star of ‘Dave’ to be piping these things down and proceeding to bounce around a stage in front of thousands as a hype man. That is the beauty of GaTa, you could give him 85 blunts a day but there is nothing you can do to tame this man’s energy.

It’s pretty clear why Lil Dicky has not performed a single concert without GaTa by his side. Head over to The Brilliantly Dumb Show on YouTube to get the full interview with GaTa and be sure to tune into DAVE on Hulu and FXX Wednesdays at 10pm EST.