The Lineswoman Hit By Djokovic Has Been Receiving Death Threats 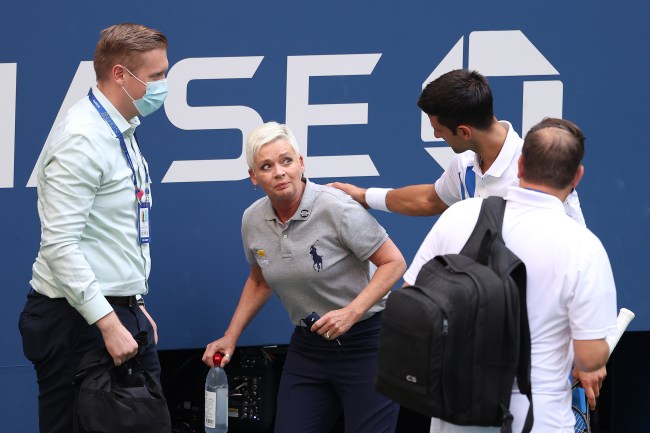 By now, you’ve probably heard that Novak Djokovich was booted from the U.S. Open this weekend after he smoked a lineswoman in the jugular by accident. Here’s the clip:

HOLY CRAP. Djokovic defaulted after he inadvertently hits a ball and strikes a line judge in the neck. She had to leave. pic.twitter.com/BECdydrKFw

Down she goes, like a wounded elk. Lots of people have made light of how she milked the hell out of this. But you know what? Good for her. America is built on petty legal settlements. Do you know how many people watch Judge Judy? She’s worth more than the GDP of Serbia. And the second that Laura Clark took that fuzzy ball off her trachea, you could almost hear the cash register sound dinging in her ears. It’s a modern-day Robin Hood story.

Except Serbia has some pretty diehard tennis fans. And they didn’t take too kindly to Clark’s role in getting their national hero DQ’d:

Daily Mail– The line judge struck by Novak Djokovic woke up on Monday to find herself subject to hundreds of vile messages on social media after his default from the US Open.

The US Open was reluctant to formally release her name, but a Serbian tabloid revealed her Instagram details, leading to a barrage of deeply personal abuse.

Some of the milder stuff referenced her interest in wine, and accused her play acting to try and get their hero disqualified. Much of it appeared to come from Serbia and the more extreme wing of Djokovic’s online fan base, who are notoriously aggressive in their insults whenever they feel their man is wronged.

Clark’s son died in 2008, and one of Djokovic’s fans told her ‘don’t worry, you’ll join him soon’

Yikes. Pretty sick commentary there. Here’s hoping Laura Clark gets PAID and can laugh off the death threats in an infinity pool somewhere tropical.