Living Next To A Bar Makes Us Happier And Healthier, According To People With Big Brains 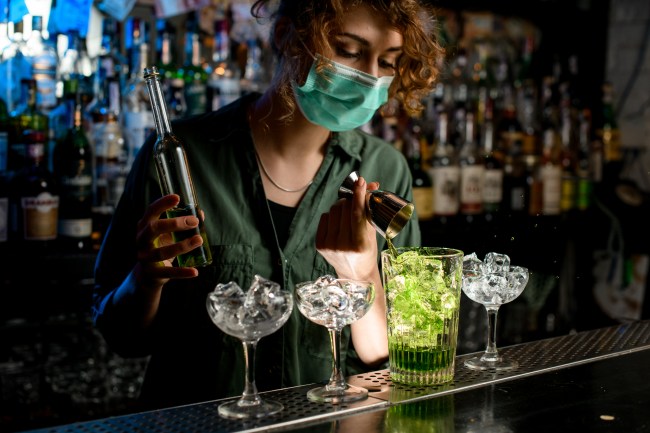 Trying to find happiness in a world where contagions, politics and societal dipshittery keeps grinding away at the very core of our sanity is kind of like trying to find a clean port-a-crapper at a music festival. You have to look – you just got to — but chances are you’ll be gagging and standing in a puddle of hippy piss before it’s all said and done. What can we say, the phrase “the pursuit of happiness” has never been any more clear today than any other time in our lives. We now understand that this section of the U.S. Constitution was just some smart-ass patter that our forefathers wrote to make We The People think that there was some God-given right to contentment during our time on this planet. But nope, all they were really saying is they wouldn’t hold any of us back from such things if we dared go after it. Sure, go ahead and pursue all the merriment and mirth you can handle, you bastards! But good luck trying to find it for real.

Fortunately, there is a loophole in the misery clause that we were all forced to agree to at birth. It is one that suggests that all an individual really needs to be happy and healthy is access to a neighborhood bar. Sounds about right, wouldn’t you say? I mean, it certainly makes sense that taking refuge in a place that slings alcoholic beverages would serve as a veritable escape hatch from the communal demons that are hellbent on grudge humping the population into an infinite sadness. But this revelation is now apparently supported by science.

Researchers at Oxford University just released a new paper showing that people who had a pub down the street from their homes were “significantly” happier than those who do not. They also found that those on “It’s 5 o’clock somewhere” time (I5OCS) had a larger circle of friends, were more satisfied with life, and were less likely to drink themselves into a blackout stupor. So flush those anti-depressants down the toilet and shit-can that smarmy therapist who’s always trying to get you in touch with your feelings. All you have to do to find complete and total happiness is to move within walking distance of a taproom. From there, life is destined to be all peace, love, and harmony.

Man, wouldn’t that be nice?

But let’s not get carried away. It really needs to be pointed out that this study, if you can really call it that, was funded by the Campaign for Real Ale. This is an advocacy group dedicated to promoting anything and everything that is beer. So, you know, the organization probably tossed a nice chunk of change at the folks at Oxford and said something like, “Whatever you do, just make us look really good.”

While those people living close to a bar might be more jovial, the reasons are not at all supernatural. It’s just that these after-hour dipsomaniacs tend to feel a greater sense of community in these spaces. They feel like they have more friends down there for which they can engage in mindless conversation with at the end of a shitty day. It’s just easier to forget about real troubles when surrounded by a bunch of people telling you how much they love you.

“Friendship and community are probably the two most important factors influencing our health and wellbeing,” Professor Robin Dunbar of Oxford University told The Telegraph. “Making and maintaining friendships, however, is something that has to be done face-to-face. The digital world is simply no substitute. Given the increasing tendency for our social life to be online rather than face-to-face, having relaxed, accessible venues where people can meet old friends and make new ones becomes ever more necessary.”

But living next to a tavern is no cure for unemployment, legal troubles, or an impending election where the best possible option is getting hit by a large truck on November 2nd. Sadly, there are just some things that not even a round of drinks and some good old fashioned camaraderie can fix. But we encourage you to try anyway.

Nevertheless, there is something to be said for staying relatively intoxicated and numb to the unrest that comes with being a citizen of the Land of the Free in this day and age. Drinking seems to be one of the few things that have gotten this country through 2020 without suffering a complete blowout of civilization. Why else do you think most of the rioters in the streets are predominately younger? It’s because they are not old enough yet to just say “fuck it” like the rest of us and drink their feelings away down at The America Is Damned Bar and Grill. But hey, we’ve got a standing reservation. So please, come join our table once you turn 21 and finally realize that we are doomed – with or without your protest. There is always room for one more. Rest assured, we’ll be there in a high-speed pursuit of some kind of happiness under the name Dizzy Stinko.