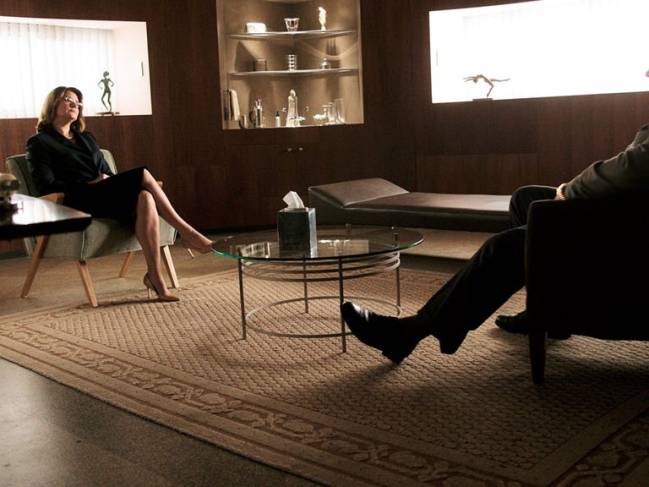 A wise man once said: “You don’t have to be smart to laugh at farts, but you have to be stupid not to.” Truer words have never been spoken. Actress Lorraine Bracco understands and values the hilarity of butt burps. So much so that she used a fart machine to play a practical joke on the late great James Gandolfini while filming The Sopranos.

Bracco, who played Dr. Jennifer Melfi on The Sopranos, appeared on a recent episode of the Gangster Goddess Broad-cast, which is hosted by Chris Kushner and Drea De Matteo, who starred as Adriana La Cerva in The Sopranos.

Bracco said that Gandolfini would “moon” her while she was reading her lines to try to mess her up. Quite the distraction.

Bracco later teamed up with Jeffrey Marchetti, the set designer for The Sopranos, to play a practical joke on Gandolfini to get revenge. Marchetti set up a fart machine under Dr. Melfi’s chair, and he pressed the button on the remote control to make fart noises while Lorraine was talking to Gandolfini.

“I said to Jimmy, ‘Listen, I don’t feel good, I don’t know what I ate, I’m sweating,’” Bracco told Gandolfini. “So I set it up — my stomach is killing me, the whole thing. Then with Marchetti, I would [clench up], and he would press the button.”

“So Jimmy finally said, ‘You’re f*cking around with me,’ and he grabs me and he takes my chair and he lifts up the cushion — but there’s nothing there,” Bracco said.

The Sopranos has experienced a recent resurgence during the lockdown since new TV shows are few and far between, plus people are looking to reminisce about times when there wasn’t a plague. In July, Variety reported that “viewership of the show’s 86 episodes has surged a jaw-dropping 179% on its HBO Now subscription streaming service since the beginning of the COVID-19 pandemic.”

The resurgence of the hit mobster show has been helped by the Talking Sopranos podcast, hosted by former Sopranos stars Michael Imperioli, who played Christopher Moltisanti, and Steve Schirripa, who played Bobby “Bacala” Baccalieri. Drea De Matteo said Imperioli and Schirripa talked her into starting her own mafia-themed podcast.

“They worked me on the whole idea and so I went back and watched the show. And Jesus Christ, it was good,” De Matteo told Deadline in May. “The show that we were originally looking to do was a little more of a psychological thing, what broke you, and how did you rise from the ashes?”

“That was our original premise for a podcast, because my friends call me the can opener,” she continued. “So I’ll just get into anything and pull everything out of your chest, you know? I didn’t know if I could do a re-watch, and what it feels like more is a re-late, where we could take this series, tear apart every theme, every character trait, every disorder, and apply it to many things that are still happening today, to every psychological thing that we all go through, to relationships, family, everything.”