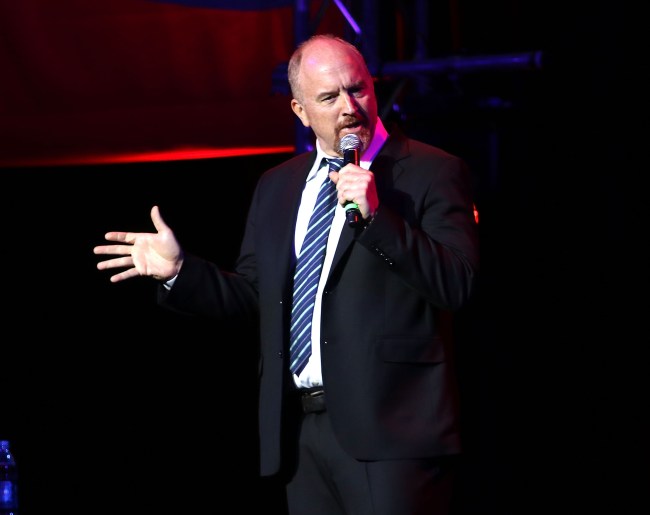 The 51-year-old performed in front of a packed San Jose Improv Comedy Club where he received a standing ovation when he took the stage. The Daily Beast reported that ticket holders were told to place their phones in sealed cases that they could only open in the lobby to discourage recordings.

About 30 protestors reportedly congregated outside the building chanting Shame!” and “San Jose, not Man Jose” as ticket-holders walked into the sold out show. According to Datebook, a protestor shouting into a bullhorn was punched in the face by a man who entered the club afterward.

“We were out here protesting doing our thing,” said the injured protestor, who identified himself as George and declined to give a last name. “And the guy saw me, came up … and he was like ‘Oh yeah, well I think if you’re out here you’re a f—ing p—y.’ And I was like, ‘Whoa dude, OK, screw you.’ And then he went for me. He punched me in the face. He tried to punch me a couple times in the head, and that happened right as the cops started rolling up.”

After Louis C.K. took the stage, he didn’t waste any time in addressing his sexual misconduct.

“I like to jerk off, and I don’t like being alone,” he said, garnering a huge laugh.

Louis then decided to double down on the controversy by recalling a controversial joke from December that mocked the survivors of the Parkland massacre in Florida, where a gunman killed 17 students and staff members.

“If you ever need people to forget that you jerked off, what you do is you make a joke about kids that got shot,” he said.

“You’ve read the worst possible things you could read about a person, about me, and you’re here. The whole point of comedy is to say things that you shouldn’t say. That’s the entire point.”

Louis taking an aggressive stance in addressing these claims is a stark contrast from his approach when he first returned to the stage in August, when he reportedly “looked frightened.” During those sets, he would say ambiguous things like “It’s been a weird year” and “I’ve been to hell and back.” It will be interesting to see where Louis’ career goes now that there are so many rooting for him to fail.