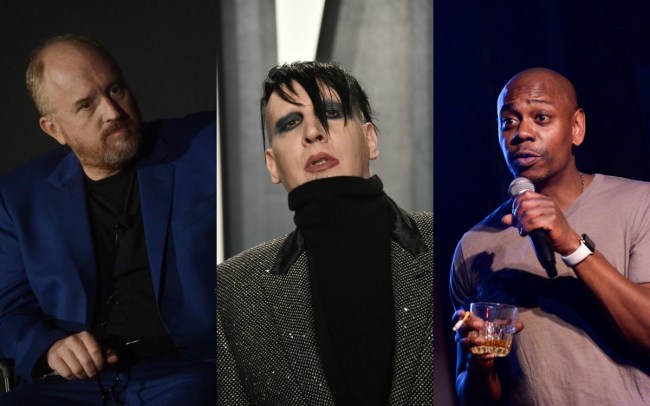 The Recording Academy announced their 2022 nominations this week, and among the notable nominees are Louis C.K., Marilyn Manson, and Dave Chappelle.

C.K., who receded from the spotlight following revelations of sexual misconduct in 2017, has since resumed live stand-up performances. In August, C.K. even performed at New York City’s Hulu Theater at Madison Square Garden in front of a massive sign that read “SORRY.” C.K. has now been nominated for Best Comedy Album for “Sincerely Louis CK.”

As for Manson, who is the subject of multiple sexual assault allegations, he’s been nominated for Album of the Year for his guest work on Kanye West’s “Jail, Pt.2” on his latest album Donda.

Finally, there’s Dave Chappelle, who was nominated Best Spoken Word Album for his special “8:46”, which was essentially a lecture/sermon about violence against Black Americans in the wake of the George Floyd protests. Chappelle — who has been the subject of recent backlash due to his jokes about the LGBTQ community in his Netflix special The Closer — being mentioned among the likes of C.K. and Manson, who have both been accused of some serious transgressions, is objectively absurd.

Following the announcement of the nominations, there were people on social media decrying the fact that the likes of Louis C.K. and Marilyn Manson were nominated.

Delighted Louis CK’s been nominated for a Grammy after admitting to sexual misconduct. Let this be a wake up call to all male comics considering sexual misconduct. Jerk off in front of us if you like, lads, but be warned, major awards may follow.

Marilyn Manson and Louis CK were both nominated for Grammies today. A long time ago I used to keep a running document of all the accolades and new jobs that were given to men who had been publicly accused of sexual abuse, but it got too long and became corrosive to my soul. 🙃

Louis CK, Kevin Hart, and Dave Chappelle were all nominated for Grammys?

If this is "cancel culture," may every woman comedian I know be cancelled instead of simply underpaid and unrecognized. 😒

they really nominated Louis CK instead of Bo Burnham for comedy album https://t.co/Wpb5J8PRbv

Comedy just loves to call men like Louis CK, and that bellend I outed, “controversial”, so they can be protected by the industry as edgy and misunderstood, rather than the unequivocal sexual predators and abusers of women they are. https://t.co/eH4D4k7nAt

In response to the backlash the nominations have caused, Recording Academy President and CEO Harvey Mason has said that they “won’t restrict the people who can submit their material for consideration.”

The 2022 Grammy Awards will take place in Los Angeles on Monday, January 31.