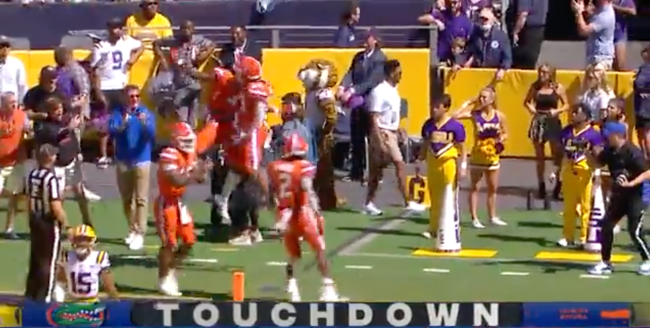 LSU football was on a roll in the first half against Florida on Saturday. The Tigers jumped out to a 21-6 lead and held that score right up until halftime.

However, with five seconds remaining in the second quarter, the Gators had one last chance to close the gap before heading to the locker rooms. Anticipating a Hail Mary, Ed Orgeron’s defense rushed four and put its other eight defenders in the end zone.

Florida quarterback Emory Jones heaved one to the corner. The ball traveled about 48 yards in the air before, somehow, landing in the hands of wide receiver Justin Shorter for a touchdown.

LSU’s coverage completely failed and it was baffling. There were five defenders in purple and gold near the end zone and none of them made a play on the ball.

The entire thing made absolutely zero sense. Had one of the Tiger defenders stuck an arm up, they likely would have gone to the half with a two-possession lead.

But they didn’t and we are the better for it because we got to experience the Russian television call. The broadcast team for Russia’s coverage of the game couldn’t believe what had happened and all they could do was laught.

It is amazing, take a look:

AS CALLED ON RUSSIAN TV: pic.twitter.com/hO8Kca02xW

As one astute Twitter user pointed out, the laugh sounded a lot like the beginning of the Gorillaz’s smash hit ‘Feel Good Inc.’ and it couldn’t be more accurate. Just listen:

AS CALLED ON RUSSIAN TV: pic.twitter.com/hO8Kca02xW

Shoutout to Timothy Burke for not only finding the hilarious call but also slapping it together with the song.