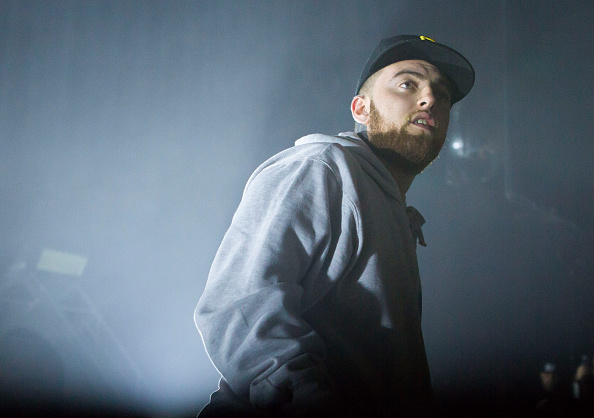 The music world is still coming to grips with the way, way too premature death of Mac Miller. The Pittsburgh rapper, who was only 26-years-old, died on Friday after an apparent overdose. We’ve already seen numerous tributes to the hip-hop sensation, but Miller was so beloved that more celebrities and entertainers have come forward to honor the deceased rapper.

“Tonight, I wanna dedicate this show to my late friend Mac Miller, who was always a kind man to me,” Drake told the crowd at Boston’s TD Garden before playing “Emotionless.” The lyrics from the song might apply to Mac Miller. “I know the truth is you won’t love me until I’m gone,” and “I know another girl that’s cryin’ out for help/ But her latest caption is ‘Leave me alone.’”

G-Eazy paid tribute to his fallen friend during his concert at Tampa Bay’s MidFlorida Credit Union Amphitheatre. “I swear life is so fucking fragile. Appreciate the moment, be present in it, tell people you love you care about them,” G-Eazy said. “Mac Miller, you changed my fucking world.” As G-Eazy performed “Everything Will Be OK,” a photo of Mac was shown on stage.

G-Easy said in an Instagram post that he “fuckin broke down on stage. Rest peacefully bro, we miss you.”

The fact you came out performed 1000%, dedicated Everything Will Be Ok to @MacMiller, cried in front of us all, and continued to perform…. we fucking love you Gerald. Thank you for changing my life and many others. @G_Eazy pic.twitter.com/G4ke5Y31qt

On Saturday night, Elton John, who was performing in Allentown, Pennsylvania for the first show of his Farewell Yellow Brick Road tour. The legendary entertainer dedicated “Don’t Let The Sun Go Down On Me” to Mac Miller, who died on Friday at his California home.

“I’d like to dedicate this song to Mac Miller,” Elton told the audience. “Unbelievably, 26 years of age, and passed away yesterday. It’s inconceivable that someone so young, and with so much talent, could do that. And I just would like to pass all of our love and best wishes to his loved ones, his family, his friends. And Mac, wherever you are, I hope you’re happy now.”

Elton John dedicates Don’t Let The Sun Go Down On Me to Mac Miller: “Mac, wherever you are, I hope you’re happy now” 😢 pic.twitter.com/oJHNfVFqdz

John Mayer shared a heartfelt letter reminiscing about the life of Mac Miller on Saturday.

This was going to be Mac Miller’s year. He made a quantum leap in his music. That’s incredibly hard to do, to evolve and get better and more focused while your career is already underway. You don’t get there without a lot of work, and Mac had put the work in. I didn’t expect to play on his album the day he played some songs for me at his house, but when I heard “Small Worlds,” I gave it a short, chirpy little “yup,” which is the highest praise I can give a track. It means we don’t need to say another word, it’s going down. I grabbed the nearest guitar in the room and within a couple of hours we had finished a tune that made me so incredibly happy to have a part in, not to mention we established a nice little friendship. He was so funny I just kind of stopped typing “LOL” back in our texts. Mac was, to me, on permanent LOL status. I gave him whatever guidance I thought I had the right to, having been through the press ringer in the past and wanting him to understand that none of that noise could ever really take a bite out of the music he was about to put out.

The last time I saw him, he was playing Hotel Cafe’ in Los Angeles for a crowd of 100 people. He was nervous, and honest about it with the audience. I thought that was so endearing, especially seeing as he would go on to play one of the best sets I’d seen in a very long time. His band was unreal. You gotta know that if you weren’t familiar with Mac Miller, you were about to be, whether you would have seen him at a festival, or a friend was going to catch a show and tell everyone they knew about it (like I did.) Mac put in the work. He made his best album and formed the band that was weeks away from becoming a breakout live sensation. Believe me when I say that. I send my love and support to everyone who knew him better, because what relative little I did, I just adored.

On Friday, Mayer posted a tribute to Miller. “I’m so sad that you couldn’t stay, Mac. I’m so terribly sad,” Mayer said on Instagram.

Yesterday we lost a member of our Pittsburgh family. @MacMiller was not just a part of music, he was part of our town.

Our thoughts and prayers go out to his family, friends, and fans.

Your friends on Fifth Ave will remember you fondly. pic.twitter.com/Qc4JgNQhQS

So sad u gone home young Mac I had to post this to smile and think about the good Time we had on the set of this movie man god bless ya family. Pittsburg we lost a real one today 🌟 @macmiller 🙏🏾 pic.twitter.com/AZkqUlhm1V

We'll make that album one day bubba. Miss you so much.

We'll make that album one day bubba. Miss you so much.

I can’t keep losing friends like this…I wish I spent more time with you these past weeks…I’m so sorry… rip MAC…you wrote the soundtrack to my college years and I’m so happy I got to know you…this sucks this really really sucks.

The 1975 would like to send our love and thoughts to the family, friends and family of Mac Miller

NOOO! I do not wanna believe my brother is dead! I cannot take this anymore, life is too short…I just know you’re now in a better place now than this place we call Earth @MacMiller …I love you bro, and will miss youu 😭

Mac Miller was Pittsburgh. My last encounter w/ him was when I was on the Pirates and he came to a game in LA. He sat right next to our dugout and cheered throughout the entire game. Literally standing and screaming every time I ran in from defense. You will be missed bro. RIP

Although I didn’t know Mac Miller, he was a fantastic artist. Sending his family and friends love during this difficult time.

I cannot imagine what Mac Miller’s family and loved ones are feeling right now. I send love to his family, his friends, and his fans. pic.twitter.com/k32Em8kct1

this is incredibly sad. mac miller was a great person and my friend
rip 🙁

Heart broken and beyond sad. @MacMiller was a friend and such a great dood. Such a talent. RIP Mac. Love you brother.

I’ve been praying for Mac. You wanna see good people make it out of whatever darkness they’re in. It hurts my heart to see this good dude, gone. Just saw him and he made sure he came over to me to say “Hello”. I’ll remember #MacMiller just like this pic.
Rest In Paradise, Fam. pic.twitter.com/lNA3KFJ3Yc