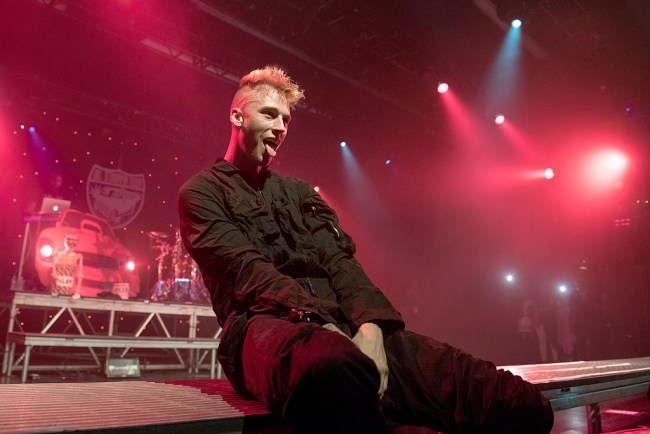 Podcaster Adam22 has over 1 million subscribers to his YouTube channel, but don’t expect Machine Gun Kelly to be one of them. MGK is still holding a grudge against Adam22 because he said that Eminem won the rap battle against Machine Gun Kelly.

The diss track war between Eminem and MGK happened well over a year ago, yet people are still talking about it as we roll into 2020. The Game recently weighed in on the MGK-Eminem rap beef and said that Machine Gun Kelly was the winner. Even Aaron Carter had an opinion on the rap battle, and said that MGK had the better diss track in Rap Devil, and that Em’s “Killshot sucked.”

Adam22 was a hip-hop fan who declared Slim Shady to be the winner of the rap beef between the two rappers. MGK took note, and it is still burning a hole in his ego.

The Rolling Loud Los Angeles Festival happened this weekend, where Machine Gun Kelly performed. Adam22 was also at the event to conduct interviews with various artists at the festival. During an interview, MGK came up to Adam22 and showed the podcaster that he wasn’t happy that he said Eminem won the rap battle.

With a grudge in his back pocket, Machine Gun Kelly walked up to Adam22 mid-interview with another artist and slapped the mic that the podcaster was holding and then walks away. “Was he trying to give me a handshake or something?” Adam says and then bursts into laughter. “That was unique. That was wild.”

Adam22 shared the video with the caption “MGK not too happy about me saying Eminem won that battle” and laughing emojis.

MGK not too happy about me saying Eminem won that battle 😂😂😂 pic.twitter.com/8zT9LamO7B

Some Twitter users slammed MGK for slapping Adam22 and not knocking the mic out of his hands. The jokes and memes hit harder than MGK’s slap.

Haven't heard about mgk in a long time. Last time i heard about him was eminem ending his career lol

when the mic was unsuccessfully knocked away pic.twitter.com/M7EYvDIfO1

MGK when the mic didn’t come off pic.twitter.com/KyXVxjP3dF

We can really appreciate the Eminem-MGK rap beef considering that all we have now is the Eminem-Nick Cannon rap beef.