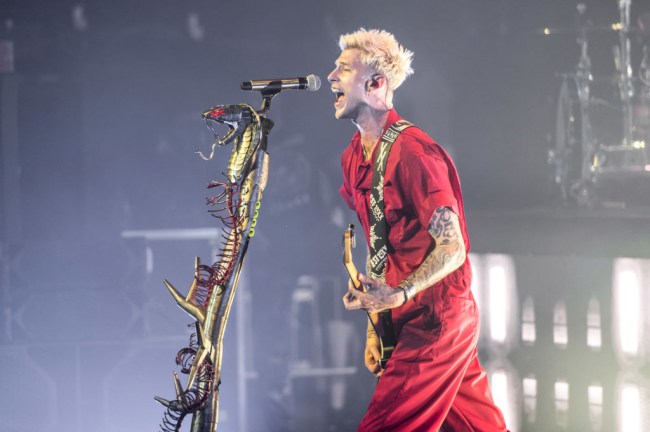 The feud between Eminem and Machine Gun Kelly is over seven years old at this point, yet respected individuals in the rap game are still talking about the diss track war between the two rappers. Yelawolf told an interesting backstory on the beef between Em and MGK on Wednesday, and now The Game is weighing in on the rap battle.

The animosity between the Cleveland and Detroit rappers started all the way back in 2012 because of a tweet. On May 7, 2012, MGK wrote on Twitter and quickly deleted: “Ok, so I just saw a picture of Eminem’s daughter… and I have to say, she is hot as f*ck, in the most respectful way possible cuz Em is king.” Hallie Jade Mathers was 16-years-old at the time and Colson Baker was 22 at the time.

The rap beef came to a crescendo when the duo traded diss tracks over the course of 15 days in 2018. On August 31, 2018, Eminem released his surprise album Kamikaze, which featured the track Not Alike that targeted MGK. Machine Gun Kelly fired back with Rap Devil, a parody of Em’s Rap God. Slim retaliated with his own diss track of Killshot on September 14, 2018.

Despite being over a year since the exchange of diss tracks, hip-hop heads are still discussing who won the rap battle. The Game declared that MGK was the winner in the rap battle with Slim Shady. The Game appeared on Los Angeles radio station Real 92.3, where he said that Machine Gun Kelly “barely won.”

“Em did what I expected Em to do, but nothing to catch up into where hip-hop is today,” The Game said on the radio interview. “I feel like Machine Gun Kelly really gave his all, like a young, hungry dude did. Eminem was Eminem—it was great. Before I heard Machine Gun Kelly, I was like, ‘Oh Eminem! He’s killing it!’”

“A lot of people probably hate me for this, but I don’t really give a f*ck about that,” the Compton rapper said on The Cruz Show. “But it was like one of those moments where you have two dudes, and they’re about to announce who’s the winner and then they hold Machine Gun Kelly’s hand up and Eminem’s like, ‘No f*cking way!’ And everybody’s like, ‘Boo!’ He barely won that, but I enjoyed it. That’s hip-hop.”

In 2010, The Game said Eminem’s album Recovery is a “classic” and complimented Marshall Mathers on his lyrical skills.

“Eminem is the only rapper that nobody ever wants a problem with, including myself,” The Game said. “Eminem is like the most lyrically insane. He a problem. I don’t think there’s a rapper he won’t slay.”

“You don’t want a beef with Eminem. He shreds MCs. I understand that he can’t be slayed by anybody.” Apparently, Nick Cannon didn’t get the message. RIP Nick Cannon.

The Game featured Eminem on the 2005 track We Ain’t off his The Documentary LP.

The Game is currently promoting his “final” album Born 2 Rap. The Game, born Jayceon Taylor, said he created 600 tracks for his supposed last album and whittled it down to 25 songs.

The Game said that some of his favorite hip-hop artists who left a massive impression on him were Biggie Smalls, Outkast, Lauren Hill, Missy Elliot, Jay-Z, and Eminem, especially Stan and My Name Is.

RELATED: Nick Cannon Fires Back At Eminem, Calls Him ‘Grandpa’ And An Erectile Dysfunction Pill