Nick Cannon Fires Back At Eminem, Calls Him ‘Grandpa’ And An Erectile Dysfunction Pill 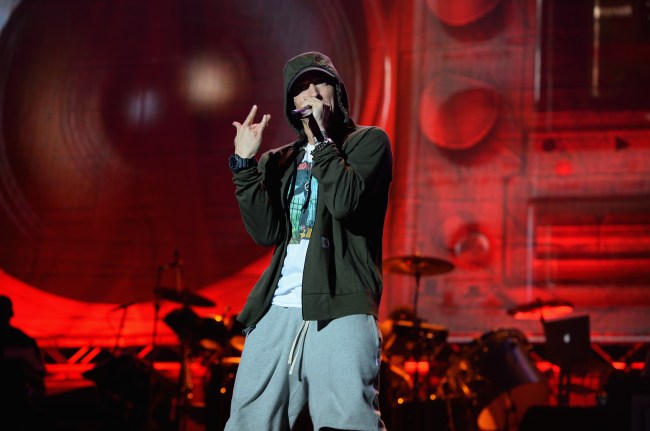 The feud between Eminem and Nick Cannon continues. What started as an intense rivalry when Cannon first married Mariah Carey years ago has continued to this day.

“Word to the Terror Squad, Joe, this is all puns aside though. I know me and Mariah didn’t end on a high note,” Slim Shady rapped. “But that other dude’s whipped, that p*ssy got him neutered.”

“Tried to tell him this chick’s a nut job before he got his jewels clipped,” Em said on the track. “Almost got my caboose kicked? Fool, quit. You not gonna do sh*t. I let her chop my balls off too ‘fore I lost to you, Nick.”

“We should change his name from Eminem to Percocet,” Cannon said on his show. “What’s the pill old people use? We are going to call him Cialis. Bring your walker, get out your wheelchair Eminem and pop whatever you want to pop.”

“Should I respond back? It’s not worthy of a response,” Cannon continued. “Then I gotta get in my time machine and put my gigolo jersey on.”

Cannon went on to say that Fat Joe’s new album Family Ties was awesome. Nick said Fat Joe did charity work to dig up “Eminem out his grave I mean cave!” Cannon challenged Marshall Mathers to appear on his MTV show Wild ‘N Out and “battle like a real legend Grandpa Marshall!”

The battle between Eminem and Nick Cannon dates back to 2009, when Slim Shady dropped The Warning, a track that attacked Mariah Carey and her husband-at-the-time Nick Cannon.

Don’t expect Eminem to be on Wild ‘N Out any time soon because Marshall Mathers never responded to Cannon’s 2016 invitation to the TV show.

So who won the 2019 feud between Eminem and Nick Cannon?