VIDEO: Machine Gun Kelly Booed Loudly At Rock Festival Before Getting In Fight With Audience Member 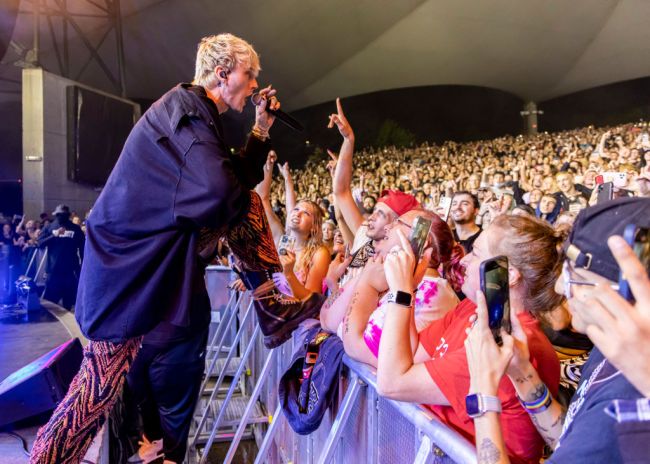 Machine Gun Kelly is going to be okay.

Any bumps and bruises the MGK absorbs will be made to disappear by The Sexiest Woman In The World.

But that may be why so many relish in seeing the 31-year-old rapper-turned-rock guy fail. That, and his consistent refusal to respect his elders. First it was Eminem, and then the Grammy Award-winning heavy metal band Slipknot.

At Riot Fest in Chicago earlier this month, MGK took aim at Slipknot, who was performing on another stage during MGK’s set, for being “old weird dudes with masks.” Kelly then sounded off on Taylor on Twitter for writing a “f*cking terrible” verse for his most recent album Tickets to My Downfall that was ultimately shelved.

corey did a verse for a song on tickets to my downfall album, it was fucking terrible, so i didn’t use it.
he got mad about it, and talked shit to a magazine about the same album he was almost on.
yalls stories are all off.
just admit he’s bitter.

Corey then responded with receipts.

I don’t like people airing private shit like a child. So this is all I’ll say: I didn’t do the track because I don’t like when people try to ‘write’ for me. I said NO to THEM. So without further ado…. #receipts
This is all I’m going to say about it. pic.twitter.com/pkhweg1Ptn

The genesis of the beef came in the wake of Slipknot frontman Corey Taylor delivering a thinly-veiled attack on MGK during a podcast appearance back in February.

“I [hate] the artists who failed in one genre and decided to go rock—and I think he knows who he is.”

Fast forward to this past weekend and it’s very obvious the Slipknot faithful have not forgotten MGK’s verbal barbs.

While performing at the metal-centric Louder Than Life Festival in Louisville, Kentucky on Saturday, MGK was “booed relentlessly” during every song he performed, with middle fingers rising up from the crowd constantly.

At one point, MGK engaged in a brouhaha with a fan who allegedly shoved him while he was singing.

Yesterday at Louder The Life Festival Machine Gun Kelly appears to have gotten in to an altercation with a fan after being booed by the crowd.

The Bad Boy Records signee took to social media following media reports about his set being marred with boos to call fake news on the narrative.

i don’t know why the media lies in their narrative against me all the time but all i saw was 20,000 amazing fans at the festival singing every word and 20 angry ones. https://t.co/hcjJ3LCfKU

Corey Taylor and MGK on the next Jake Paul undercard? I’d watch.