Machine Gun Kelly’s Neighbors Hate Him And His Friends: ‘They Just Park The Car Wherever It Lands’ 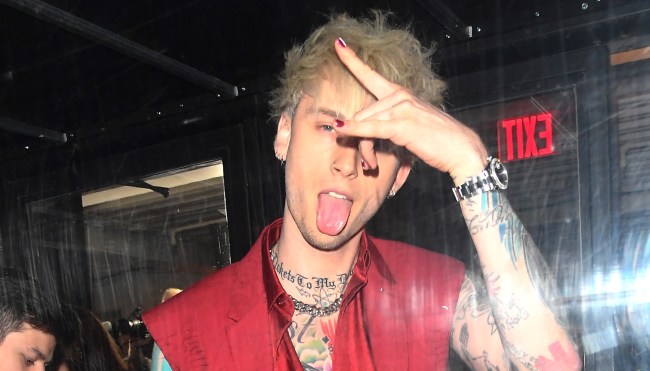 Machine Gun Kelly’s neighbors hate him and his friends, according to Flipping Out star Jeff Lewis, who lives across the street from the rapper.

Lewis first made this statement on his Sirius XM radio show Jeff Lewis Live and it has since blown up into one of the weirdest celebrity beefs we’ve seen since the ‘Cash Me Ousside’ Girl’s mom got into it with Disney Star Skai Jackson’s mother.

“They still park in front of the fire hydrant. They park in front of other people’s driveways. It’s just like, I think they’re so f***ed up, they just park the car wherever it lands,” Lewis said on his show after MGK and his friends celebrated his 30th birthday in the driveway, not social distancing, and day drinking.

Machine Gun Kelly heard what Lewis said about him and so when he appeared on Lala Kent’s podcast he issued a veiled threat that things could get worse in the neighborhood.

“He can’t stand me,” said MGK. “He doesn’t know that we know he does a podcast about us. He doesn’t know it’ll turn into Neighbors real quick. Imma be Zac Efron. I’m Tom Petty. Petty in all caps.”

Then one of MGK’s “disciples” as Lewis called him, confronted Lewis’ brother Shane for “talking about us on your podcast.”

“It’s not a f***ing podcast,” said Lewis. “If they have an issue, come to me. He said, ‘I heard you’ve been talking about us on your podcast and it’s not hot. This guy says, ‘I’m not aggressive but some of us are.’ That is a threat. This is a nice family neighborhood, we don’t need to threaten each other with violence.”

Lewis added, “If this happens again, this guy will be spending his stimulus check on bail and attorney’s fees.”

“They have to understand, I don’t hate them. My neighbors hate them because my neighbors have complained about them to me,” Lewis continued. “Every time the cops show up, or every time a car gets towed, or every time someone gets a ticket, they’re assuming it’s me. It’s not me. I didn’t call the cops. When you Instastory a gathering, you are opening yourself up for criticism.”

Last Thursday, MGK took to Instagram to try to clear the air.

“Jeff, as the new guy on the block, referring to you, I wish we had a chance to meet,” he said. “I’m sure there’s years of noise to come from my house, so I hope we have a mutual understanding. If you ever need anything, just come knocking. Until then, I’m going to send this over your way, cheers neighbor.”

The video ended with MGK sending a bottle of Dom Perignon across the street to Lewis’ home on a skateboard.

Lewis responded with a photo of the champagne and the caption, “I accept. Now please move your car @machinegunkelly.

Self-isolation is so much fun, ain’t it?