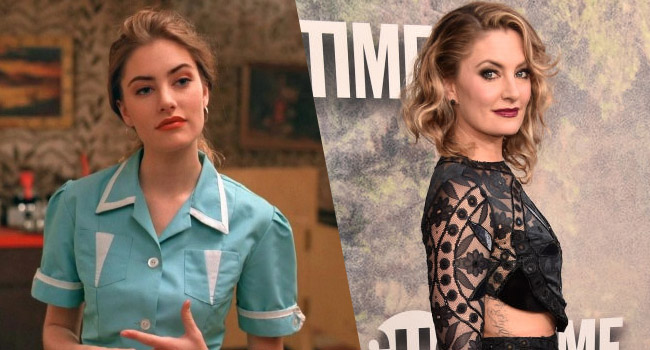 Way back in 1990, an aspiring 19-year-old actress named Mädchen Amick became a household name thanks to a TV show that sadly, lasted only two seasons. That show was called Twin Peaks, and she flourished in her role as troubled waitress Shelly Johnson.

Twin Peaks, and the movie that followed, Twin Peaks: Fire Walk With Me, was Amick’s first major acting role in Hollywood. Prior to that she only made a couple of one episode appearances on shows like Baywatch and Star Trek: The Next Generation.

Following the abrupt, and in many people’s eyes, unwarranted cancellation of Twin Peaks, Amick appeared in several unremarkable films, but she did still find some success on television.

Amick starred as Carrie Fairchild on the CBS drama Central Park West, before it was cancelled. Did 13 episodes on the reboot of Fantasy Island, before, yep, it was canceled.

She did spend 10 episodes playing Wendall Meade on ER, which managed to last four more seasons after her departure. Later, Amick spent 22 episodes on the ABC sitcom Freddie, which I have never heard of in my life. It too got the axe.

A slew of TV movies and short, recurring roles on a number of TV shows later, Lifetime came calling with a show called Witches of East End that… lasted two seasons.

However, it seems that the key to Amick’s success, even 26 years later, lies once again with Twin Peaks, which was rebooted on Showtime in May of 2017. This time the show had excellent viewership, which led nicely into Amick’s current role on The CW show Riverdale, based on the characters by Archie Comics.

On Riverdale, Amick plays Alice Cooper, Betty’s mom, editor of the local paper, and a complete badass, once again proving that a quarter of a century later, she can still slay all day.

In a new profile for Resident magazine, Amick, who turns 47 on December 12th, spoke about (among many other things) why she thinks Twin Peaks has been such a cult classic…

Starting my career with Twin Peaks I got to see a masterpiece at work and I didn’t realize it until I went out and had a 30 year career. I constantly reflected back on that experience and apply what I learned to my body of work. What became really clear to me over the years was that to make a successful show requires whomever is at the helm to have a true vision and stick to that vision even though they are being pulled in so many different directions with different voices. You also have to sprinkle in a little bit of genius at the same time to make a true cult classic.

So will there be a second season for the Twin Peaks reboot?

Of course everyone wants to see a follow up season. And I would totally be up for that if David [Lynch] and Mark [Frost] want to continue.

I know a lot of fans are most definitely up for it. Make it happen, guys.

Check out the rest of Amick’s photos and the rest of her fascinating interview over at Resident.