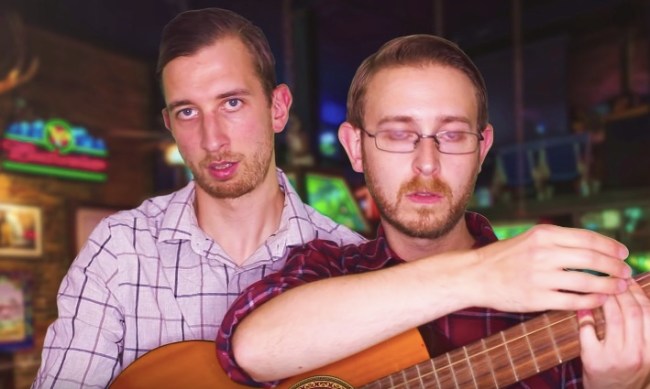 Ed Sheeran is a pop musician. That’s what he is. He might’ve started as a wannabe troubadour singer/songwriter but these days he drops radio hits and nothing else.

Not that there’s anything wrong with that. Making a commercially viable catchy radio song is a task that a super small percentage of musicians ever achieve. But Ed Sheeran‘s got this shit down to a science at this point and YouTuber Brett Domino’s here to show you Ed’s formula for success.

He’s created this clip showing exactly what it takes to write an Ed Sheeran song of your own and it’s remarkably simple. The ingredients that go into this special sauce are (1) an acoustic guitar, (2) 4 chords, (3) 3 keynotes, and (4) a word cloud of Ed Sheeran lyrics.

He makes it look so easy I can’t help but be impressed. And sure, ‘banger’ might’ve been a bit of a stretch here but if you believe that Ed Sheeran’s dropping bangers on the radio (and his bank account says he is) then this is a certifiable banger even if the point of it was to make fun of Ed Sheeran’s song structure.

The only thing missing in this song was Ed Sheeran’s signature elements of God, Ireland, and Love. It seems like that dude’s all about those three key elements in his song and this one was missing two of those three.