VIDEO: Man Goes BERSERK On Deli Clerk For Taking Too Long To Make Bagel Sandwich And His Order Is Offensive 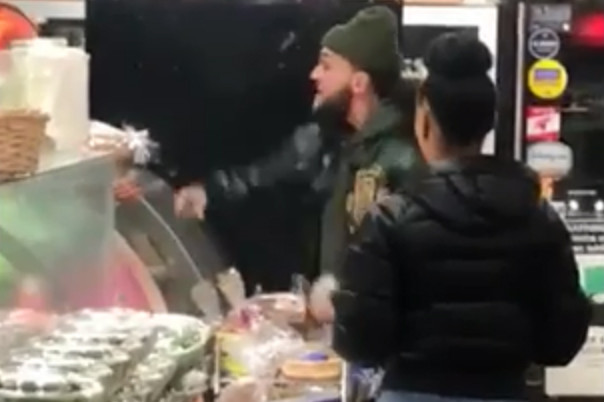 Sounds like someone’s got the case of the hangries. A Brooklyn man went absolutely berserk on a deli clerk who took too long to make his bagel sandwich. The scary part is that the abusive behavior wasn’t the worst part… his bagel sandwich was downright offensive.

A belligerent man became impatient waiting for the deli worker to make his bagel sandwich around 4:30 a.m. on November 25. The bad egg was hot-tempted as he scolded Sanjay Patel, who was working at the deli in East Williamsburg. The entire violent rampage over a bagel was all caught on surveillance video.

“Make my sh*t right now!” the bagel Nazi screamed. The douche bagel went completely ballistic — slamming his hand on the glass deli case as well as hurling a metal bell and several loaves of bread at the unfortunate employee. “He’s ordering and the deli is busy at that time and he’s little bit drunk,” Patel told ABC 7 News. “And he’s crazy.”

You may assume that this fella is just having a bad day, but then you hear his order and immediately realize that he is indeed a deranged individual. “Make my cinnamon toast cinnamon raisin bagel with bacon, egg, and cheese right now!” the lunatic demands.

Bruh, how are you going to act like you’re better than anyone else when you order such garbage bagel sandwiches? When ordering a BEC sandwich you obviously get it on an everything bagel, not on a cinnamon raisin like some Neanderthal. One might suggest that the deli worker spit in this guy’s food, but honestly, that would probably only improve this abdominal sandwich.

“It was scary,” Patel said. “He said he was going to shoot me. He said he would kill me.” You’re going to go all Tommy DeVito from the bar scene in Goodfellas over a yeast ring? Patel suffered bruising and swelling after the attack and was taken to a local hospital for treatment. Can you imagine getting arrested over a bagel sandwich, a sh*tty one never-the-less?

Now the police are looking for the belligerent bagel bully and have gone on a schmear campaign to ask the public’s help in apprehending him. The NYPD is asking anyone who recognizes this chooch contact NYPD Crime Stoppers at nypdcrimestoppers.com or call 1-800-577-TIPS (8477) or text 274637 (CRIMES) then enter TIP577. They note that the suspect was last seen wearing all green clothing and believed to be in his late teens or early 20s. This man had better hope the police don’t find him because they’re going to lox up him.

“Make my cinnamon toast cinnamon raisin bagel with bacon, egg and cheese right now!” Police are looking for the man who went bananas at a deli worker — all over a bagel #OnlyInNewYork https://t.co/ZkmG9cpY0m pic.twitter.com/XykJOiySw5