Man Mixes Up Obama And Osama Bin Laden On TV, Hilariously Goes Viral, Then Explains Himself 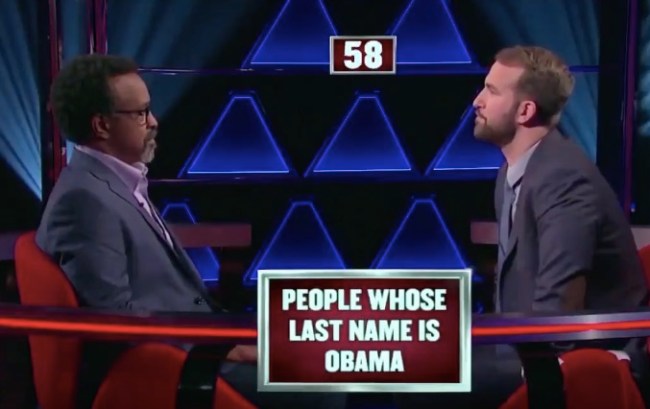 You might’ve seen the name Evan Kaufman in the news over the past 24 hours. Some headlines and tweets poked fun at him for being racist on TV’s $100,000 Pyramid where he appeared opposite SNL alum Tim Meadows.

What happened is this, Evan Kaufman confused Barack Obama’s name with Osama Bin Laden and this clip was distilled down to like 5-seconds that has gone viral with millions of views across social media in the past 24 hours.

Here’s the clip if you haven’t seen it yet:

You NEVER go full Randy Marsh. You know the instance I’m referring to, the one when Randy was on Wheel of Fortune and said the N-word. This guy went full-on Randy Marsh.

The irony here is that in South Park, Randy Marsh is also the world’s biggest Barack Obama fan. He’s the dad who was blacking out on the Obama election night. Just like Evan Kaufman, Randy Marsh would’ve voted for Obama 3 times. It’s also full Jenna Maroney like the time on 30 Rock she said she’s voting for Osama:

He confused the names of America’s first black President with the worst terrorist in U.S. history. As you can imagine, people weren’t happy about this. They see inherent racism in his response.

Instead of waiting for the maelstrom to build, Evan Kaufman took to Twitter to explain himself and shed some light on how this happened. In a 13-tweet explanation, he details how he’s an exhausted new father and how the producers of the show got up in his head before filming.

Here’s Evan’s explanation of what happened in the wake of his going viral:

So. This is me below. Racist $100,000 Pyramid Guy. Let me tell you the story about perhaps the most embarrassing moment of my life. #KillMe (Thread 1/13) https://t.co/CcyxnxXsC9

I was on $100,000 Pyramid. I’m playing with Tim Meadows, one of my heroes from SNL. My son had been born two weeks prior. I am very tired but excited to win money for my family. We play up the whole tired Dad thing. (2/13)

The producers of the show tell us beforehand, if we get to the final round, to study the questions VERY hard. “People misread them!” They say. They have no idea. (3/13)

I lose my first round. I think, oh well… no Pyramid for me. Then Meadows and I go on a run in the second round. We’re having fun, he’s cracking jokes! This is great. (4/13)

I make it to the final round. I remember what the producers said. I try and focus. READ THE QUESTIONS CAREFULLY. (5/13)

The first square flips. I breathe. I read “People Whose Last Name is Obama.” I freeze. There’s only one. BARACK OBAMA. The man I would have voted for three times*! (*H/T Jordan Peele) (6/13)

“Who else is a famous Obama?” My brain is racing. I need to list multiple people. I can’t just say Barack. What I should have said was, “Michelle, Sasha, Malia, Bo! The PORTUGUESE WATER DOG BO!” (7/13)

Here’s what my brain decided. Who is associated with Obama? Who did he kill? What sounds like Obama! (8/13)

And so you have this perfectly viral clip. A clip that is insanely funny. It would be so funny if it wasn’t me. The editing is impeccable. The little breath I take? I’m working so hard to get it right. (9/13)

But this just goes to show you that even a liberal Globalist Cuck like yours truly has some inherent racism lurking in my brain. What a disaster. (10/13)

What you don’t see in this clip is me, shocked, correcting myself and saying Barack. Tim gets the answer. We get stumped on Margarita a few questions later. Turns out Margarita is Tim Meadow’s Grandmother’s name. (11/13)

Tim feels bad he lost the money for me, because he's sweet. Kathy Najimy can't look me in the eye. I leave knowing that my day of reckoning is coming. Maybe they can cut it out? They can't… it's timed. (12/13)

What do you think, does his explanation suffice? I think so. Did he even need to explain himself in the first place? Eh, probably. Unless he wanted this to follow him around from now until the end of time.

He could’ve just gone on living his life and people would’ve eventually started to harass him, I’m sure. So it seems smart to get out in front of the viral clip.

Truth be told, this will all blow over for him in the next week. It was an honest mistake. Hopefully, enough people see his explanation to realize that the man was all up in his own head due to a lack of sleep and the show’s producers confusing him.