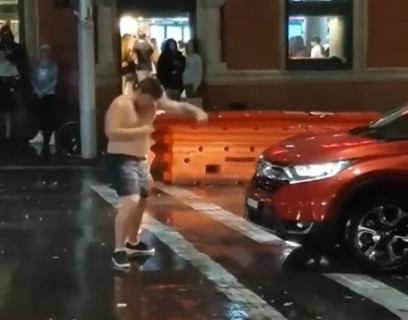 In this corner, wearing a red paint job and weighing in at 3,655 pounds is an SUV. And in this corner, wearing black trunks and weighing in at an even 204 pounds is this guy. That is the strange fight matchup in what might be your “Video of the Week.” A shirtless Australian man picked a fight with a car in the middle of the street right in front of a KFC during a pouring rain storm.

We take you to Australia, where a man went head-to-grill with a vehicle in the Sydney Central Business District (CBD). The viral video shows the shirtless man show off an array of impressive fighting skills from boxing to mixed martial art kicks at a traffic light on the corner of George and Bathurst Street. Pouring rain won’t stop this shadowboxer from putting on a make-believe ass-whopping on the red SUV, as seen in the video posted in the Idiots Fighting Things subreddit.

He worked up an appetite and proudly trotted off to the KFC to enjoy a post-fight feast of fried chicken. Which was just in time because the light changed to green and the caravan of cars drove down the street.

“Just a dude living his best life,” one Redditor said.

Another person said, “Looks like a new GTA player trying to learn the controls, an NPC would just run straight into the hood and then 12 police officers would have come and killed the driver.”

One person on Reddit compared it to an old school video game, “It’s the bonus round from StreetFighter II.”

Nominate this gentleman for “Dudes posting their W’s.”