‘Man Flu’ May Be Real, New Scientific Research Explains Why Guys Suffer More When Getting Sick 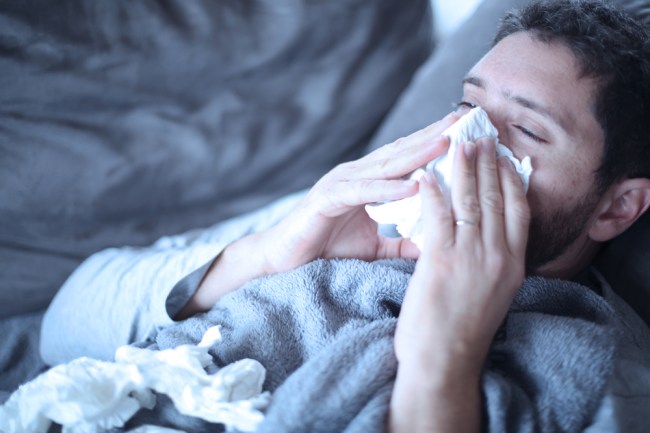 Did you ever feel like when you and your girlfriend were both sick at the same exact time that you seemed to be hit harder than your significant other? You might have a valid reason to feel worse than your girlfriend — the man flu. The fabled man flu has been theorized about for awhile, but many dismissed it as whiny men who wanted to be taken care of or to duck out of taking out the trash. New scientific research states that the man flu is real and explains why guys suffer more than women when they get sick.

Dr. Kyle Sue, a clinical assistant professor in family medicine from the Memorial University of Newfoundland, revealed the new research in the British Medical Journal. “It’s a frequently heard stereotype,” said Dr. Sue. “Men may not be exaggerating symptoms but have weaker immune responses to viral respiratory viruses, leading to greater morbidity and mortality than seen in women.”

Higher testosterone levels in men might negatively affect the immune system. Meanwhile, women may have been gifted a stronger immune system courtesy of their hormones. Dr. Sue reviewed several studies involving both animals and humans. In animals, he noticed that females seemed to fare better when infected with the flu thanks to estrogen. Dr. Sue also found evidence that adult men have a higher risk of hospital admission and higher rates of influenza-associated deaths compared with women. Another study showed that men with higher testosterone levels had more suppression of the antibody response.

“I do think that the research does point towards men having a weaker immune response when it comes to common viral respiratory infections and the flu,” Sue told the Guardian. “This is shown in the fact that they [have] worse symptoms, they last longer, they are more likely to be hospitalized and more likely to die from it. So it makes sense that we could differ in our responses to cold and flu viruses as well.”

However, not every scientist and doctor is onboard with the man flu. “The vast majority of robust scientific evidence suggests that flu is not sexist and there is no such thing as ‘man flu’,” said Professor Helen Stokes-Lampard, Chair of the Royal College of GPs. “While there are people who believe that ‘man flu’ is an actual disease, and some men (and women) genuinely believe it is the reason they are unwell, there is little science to back this up.” But she did concede, “There has been some research to suggest respiratory tract infections, as they are known, can present more severely in men than women and the best advice for anyone affected is to rest at home, drink plenty of fluids and to take over-the-counter painkillers, such as paracetamol, if necessary.”

So lay on the couch, binge-watch the hell out of your favorite Netflix show and don’t let anyone dismiss your sickness or accuse you of exaggerating your misery from colds and flu because science suggests you might have it worse.