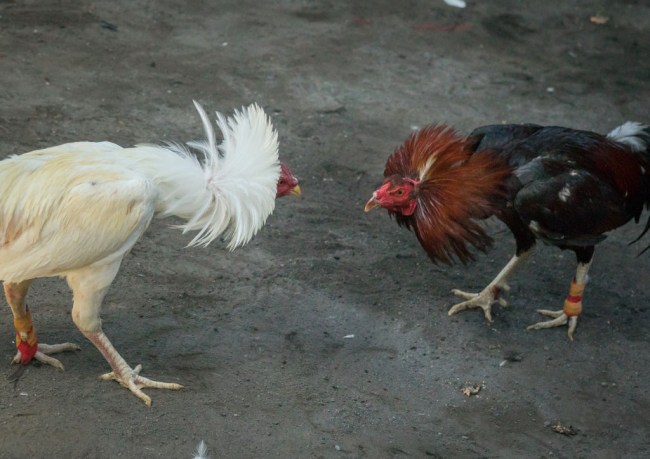 Getty Image / Eric Lafforgue/Art in All of Us / Contributor

A rooster attacked and killed its owner on the way to a cockfight. This could be the first act of rebellion in the animal uprising.

We take you to India, where a man died after he was attacked. On January 15, Saripalli Chanavenkateshwaram Rao was on his way to a cockfight with his prized rooster. For some reason, Rao took the safety off his weapon — the razor blade was still on the rooster’s claw.

Rao, who lived in Pragadavaram village in southern India’s Andhra Pradesh state, was attacked by the rooster. The animal sliced the man’s throat with the blade and was killed by his own cock. The 50-year-old Rao was taken to the hospital, where he later died from a stroke related to his injuries. Peter Griffin had better watch his back.

Cockfighting has been illegal in India since 1960. However, animal fighting continues to be a problem in the country, according to Gauri Maulekhi, trustee for India’s People for Animals foundation.

“The offenses have been made very clear and explained to the district and state authorities, but they choose to turn a blind eye towards it,” said Gauri Maulekhi, a trustee for India’s People for Animals organization. “It is not just for entertainment that these animals are made to fight, but it is (also) due to the heavy betting and gambling that goes on in the garb of these events.”

Here’s a fun fact that people who own cockfighting rooster should know: The protein chemical structure in chickens shows an evolutionary link to Tyrannosaurus rex. A team of scientists found a similarity between the amino-acid sequence from the T. rex collagen to chickens.

If you thought you were going to get a cockfighting story without the Seinfeld Little Jerry episode, you are sorely mistaken.