Killer Chimps Are Terrorizing Villages In Uganda And Eating Children 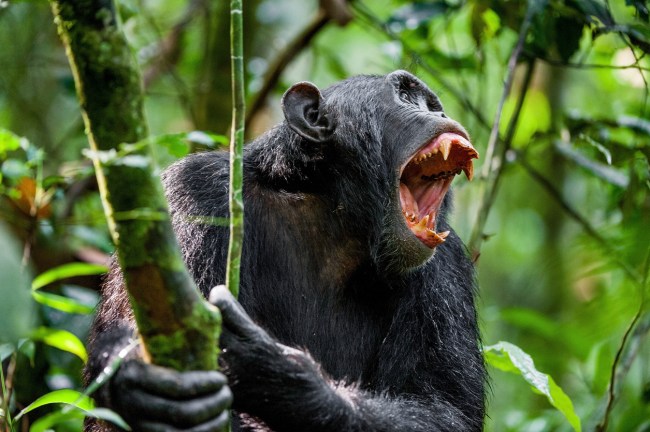 Killer chimps are lashing out on humans as their habitat shrinks. A new report from National Geographic details how chimpanzees are becoming violent towards humans as well as raiding the crops and livestock of people in Uganda.

Chimpanzees have suffered much habitat loss in recent years in Western Uganda as humans expand into areas formerly untouched by people. Large swaths of land are being transformed from wild natural regions into massive farms where forests are decimated and homes being built. This has increased confrontations between humans and chimpanzees.

Over the past 20 years, there have been more than 20 attacks on humans by chimps in the western region of Uganda. At least six young children had been killed in the area by chimpanzees, and their murders were extremely barbaric.

In 2014, Ntegeka Semata was in a garden with her four young children in Western Uganda. She was digging and went to get her children some drinking water, once she turned her back, the killer chimp saw an opportunity and pounced.

The chimpanzee grabbed her two-year-old son by the hand and dragged him away. The child was screaming, which caused the villagers in Muhororo to attempt to rescue the toddler. However, it was too late.

“It broke off the arm, hurt him on the head, and opened the stomach and removed the kidneys,” Semata said. Her child died on the way to the hospital.

Semata, who had lived in the village with her family for over three years, built a bamboo fence around their backyard to prevent chimpanzees from attacking their children. “I am scared all the time that other chimpanzees might come back,” Semata said.

Eventually, the Ntegeka and her family were too afraid of the killer chimps, so they moved in 2017. They now rent a room three miles away from where their son was murdered. “I feel like we’ve been cast back into poverty,” Semata said.

On May 18, 2017, a young child named Maculate Rukundo was also snatched from a farmland in the town of Muhororo, while her mother was picking the crops.

“The mother chased the chimps but then backed off, terrified, and ran to get help,” the National Geographic read. “A crowd of local people, soon joined by police, tracked the chimps to a patch of forest, where the little girl lay dead in a pool of blood and intestines, her gut torn open by chimp fingernails.”

Chimpanzees have been losing their natural habitats of rain forests, and have also lost their food sources, so they are adapting. Male chimpanzees or pan troglodytes will kill for meat on occasion, usually by ripping apart their prey such as antelope.

Chimpanzees are listed as an endangered species according to the International Union for Conservation of Nature. There are estimated to be less than 300,000 chimps across the continent of Africa.

Killing chimps is against the Ugandan law, but that hasn’t stopped vengeful villagers from hunting the animals that attacked their settlements and citizens.

RELATED: Monkeys Cloned For The First Time Ever, Could Humans Be Next?