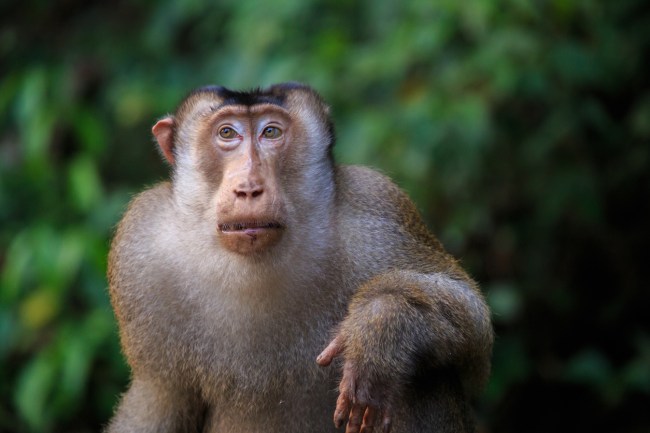 Look at that adorable monkey above. Cute feller, ain’t he? Don’t let this cute face fool you. These southern pig-tailed macaques are absolute killers. These monkeys pass on bananas and go straight for devouring very large rats.

We take you to Malaysia, where scientists made a stunning discovery. Southern pig-tailed macaques visit palm oil plantations to feed on rats. This is a significant scientific finding because macaques are known to usually only consume fruits.

A photo shows a southern pig-tailed macaque eating a large rat head-first. How else would you eat a rat beside head-first, you want to leave the tail for the end so you can slurp it down like a spaghetti noodle.

The photo shocked scientists not because the monkey ripped the rat’s head off with its teeth, but because there was no evidence that macaques eat rodents. There was proof that macaques occasionally consume small birds and lizards.

“I was stunned when I first observed that macaques feed on rats in plantations,” said Nadine Ruppert of the Universiti Sains Malaysia. “I did not expect them to hunt these relatively large rodents, or that they would even eat so much meat.”

Ruppert found that a group of 44 macaques killed 3,000 rats per year on average. That’s nearly 70 rats per monkey or one rat consumed over the course of a year, the Sun reported.

“They are widely known to be frugivorous primates who occasionally feast on small birds or lizards,” said. Ruppert tracked macaques between January 2016 and September 2018 in plantations around the Segari Melintang forest reserve and revealed ger findings in the Current Biology journal.

“By uncovering cavities in oil palm trunks where rats seek shelter during the day, one group of pig-tailed macaques can catch more than 3,000 rats per year,” said Anna Holzner of the University of Leipzig.

The rat-eating macaques have been a blessing for palm oil plantations since rodents damage approximately 10% of palm oil crops. Perhaps we could unleash the southern pig-tailed macaques on Washington D.C. to feast on the rats there?

RELATED: World’s First Monkey-Human Hybrid Created By Scientists Who Didn’t Stop To Think If They Should

This is like The Simpson’s episode where Bolivian tree lizards ate pigeons so Springfield imported Chinese needle snakes to eat the lizards and then were forced to bring in snake-eating gorillas to control the population of snakes.

“We expect that our results will encourage both private and public plantation owners to consider the protection of these primates and their natural forest habitat in and around existing and newly established oil palm plantations,” said Anja Widdig, of the University of Leipzig.

Here is a video of monkeys saving a mouse from a snake, but maybe they aren’t rescuing the rodent and instead want to eat the mouse.