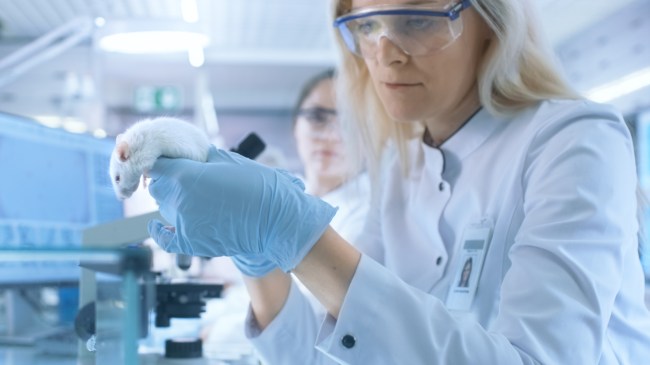 In what sounds like a chapter straight out of H.G. Wells’ 1886 science fiction novel The Island of Doctor Moreau, scientists are preparing to implant mini human brains into animals. The world-altering procedures also come with a number of ethical concerns about the ramifications of the intriguing, yet potentially scary science.

In a new scientific paper titled “Transplantation of Human Brain Organoids: Revisiting the Science and Ethics of Brain Chimeras” published in the journal Cell Stem Cell, researchers at the University of Pennsylvania pose the ethical concerns associated to the “potential humanization of host animals.”

This is a topic we discussed in August when there was a report that scientists in China were involved in a project is to create human-animal chimeras, which is a single organism composed of cells from different species. That project injected human cells into monkey embryos to create the world’s first monkey-human hybrid.

Scientists grow these organoids by taking a sample of stem cells from a human. These stem cells are pluripotent, which means that they are capable of becoming different types of cell types, such as neurons. The cerebral organoids will organize into specific sections of the brain, such as the cortex and cortical cells.

Researchers take these cells and implant them into animals such as rodents. Rats that have had human brain cells embedded in them performed better in intelligence tests. There is potential that animals could be augmented with human intelligence and consciousness, opening up many questions. Could these rodents turn into super smart The Secret of NIMH rats? Or will they become Pinky and the Brain rodents who attempt to do “the same thing they do every night, try to take over the world!”

RELATED: Scientists Revive Cells From A 28,000-Year-Old Woolly Mammoth And We Are One Step Closer To Jurassic Park

Neuroscientist Isaac Chen from the Perelman School of Medicine at the University of Pennsylvania is concerned about the ethical implications and the risks associated with scientific procedures such as this.

Chen is extremely well-versed on the subject because in 2017, his team transplanted a human cortical organoid into the area of a rat’s brain that processes visual information. The experiment was a success, and the human brain integrated with the rat’s brain. The human portion of the brain was able to interact with the rat’s eyes and process information through the rodent neurons, which are quite different than more complex human neurons.

“Much of the reason we as humans are able to talk, to think, to rationalize, to do all of these higher-order functions is based on the cerebral cortex,” Chen said. “The scale of the cerebral cortex in a rat is different. A human brain has upward of 16 billion cortical neurons, as opposed to a rat, which in total has only 200 million neurons. There’s a huge difference. There are also more complex connections in a human brain between different areas of the cortex and between the cortex and other structures. You don’t find those same type of connections in a rat brain.”

“Recent demonstrations of human brain organoid transplantation in rodents have accentuated ethical concerns associated with these entities,” researchers at the University of Pennsylvania state in their paper. “This practical approach suggests that augmentation of discrete brain functions in transplant hosts is a more relevant ethical question in the near term than the possibility of ‘conscious’ chimeric animals.”

“We hope that this framework contributes to a balanced approach for proceeding with studies involving brain organoid transplantation and other forms of human-animal brain chimeras,” the authors of the paper write.

RELATED: Scientists Brought Worms Frozen In Permafrost For 42,000 Years Back To Life And This Is How Our Existence Ends

Scientists argue that there are no risks of human-animal integration at this time because the tiny cerebral organoids can only handle very basic brain functions. The brain portions are too small to handle more higher-order thought processes and complex tasks such as understanding consciousness, complex emotions, or awareness.

Cerebral organoids have been used extensively in the medical community before animal transplants to study brain development, cognitive disorders, depression, schizophrenia, brain trauma, strokes, and how diseases such as Zika affect the human brain. But organoids by themselves don’t survive very long because of a lack of blood vessels and immune cells. That’s where the animals come in.

But if technology continues to advance at breakneck speeds, there will be real ethical concerns about creating animals that have an entire human brain. Chen believes that with the next five years cerebral organoids could advance to the brain development of a small child. What rights will these half-humans have? On the other hand, giving animals a part human brain could possibly allow us to communicate with them. I, for one, welcome our new rat overlords.

Sarah Chan, who is Chancellor’s Fellow in Ethics and Science Communicator in The Usher Institute at the University of Edinburgh, explains the potential ethical concerns about brain organoids and chimeras.

RELATED: World’s First Monkey-Human Hybrid Created By Scientists Who Didn’t Stop To Think If They Should