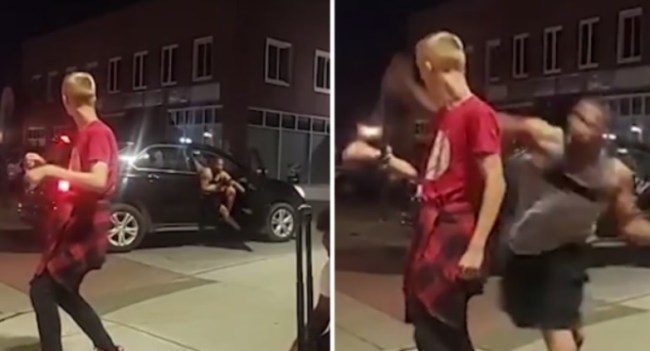 Police have identified a suspect after a 12-year-old boy was randomly attacked on the street while he was dancing in downtown Cape Girardeau, Missouri.

In a video that went viral this weekend, a boy was seen peacefully dancing and performing on the street when a man gets out of a dark-colored SUV and punches him in the back of the head. The man then got back into the car and fled the scene.

The man has been identified by police as 27-year-old Cedric Charles Moore Jr. and he is still on the loose while facing charges for two felony accounts, one for second-degree assault and another for child endangerment.

BE ON THE LOOKOUT: Police say 27-year-old Cedric Charles Moore Jr. is the man who punched a 12-year-old boy in the back of the head in Cape Girardeau on Friday, knocking the child to the pavement. The attack was recorded in a Facebook Live video. https://t.co/rRRYwFuUMZ

Cedric Charles Moore Jr. has been charged with felony assault in the second degree and felony child endangerment in the first degree due to the age of the victim and the violence of the act … according to cops in Cape Girardeau, MO.

Cops say they were able to ID Moore after seeing video footage of the unprovoked attack that went down Friday a little after 11:30 PM. Cape Girardeau PD says officers have been to Moore’s home and various other locations he is known to frequent, but they’re getting no cooperation from the his friends and family.

The local prosecutor’s office chose not to file a hate crime against the man despite calls from the public to do so.

The public has understandably expressed a desire to see Moore charged with a hate crime for this heinous crime but in accordance with state statutes, this charge would only apply if the assault was categorized to a lesser degree, which would not be in the best interest of seeking true justice for the victim,” the news release says.

The news release includes a statement from Cape Girardeau County State Prosecutor Mark Welker, saying: “The statute to file a hate crime is listed under RSMo 557.035. This statute allows the State to enhance only specific crimes if the State believes that the crime was motivated by race, color, religion, national origin, sex, sexual orientation or disability of the victim. The possible crime that would fit this matter that is capable of being enhanced by the Hate Crime Statute is Assault in the 3rd degree. This is a lower degree of assault then what has been filed. The Endangering and Assault 2nd are not offenses that are eligible to be enhanced by this statute.”